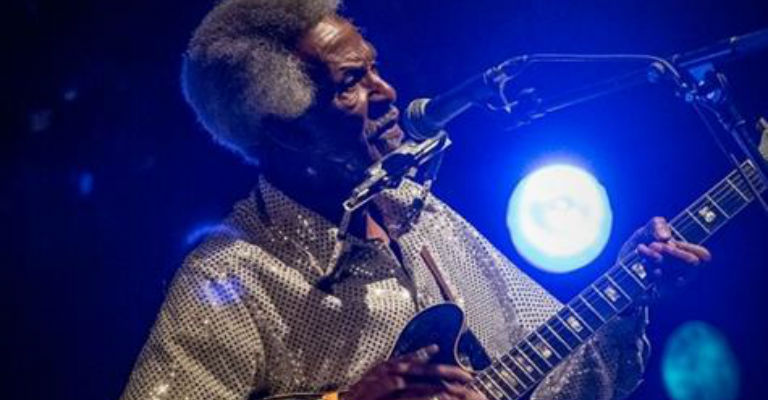 From shot-gun shack and cotton-field to festival main stage, the prodigious talents of Lil’ Jimmy Reed have taken him a long way from the Mississippi river.

One of the last surviving performers of classic Louisiana down-home blues, Lil’ Jimmy’s stinging guitar work, gritty vocals and haunting harmonica have been taking Europe by storm. His music has won him many awards and in 2014 he was inducted into the Blues Hall of Fame.  He is accompanied on piano by Bob Hall, widely regarded as the UK’s finest blues and boogie exponent, and by Hilary Blythe on bass.

Born Leon Atkins in 1938 in a shot-gun shack in Hardwood, LA, a small cotton town on a bend in the Mississippi river, he grew up near a nightclub where blues stars Slim Harpo and Lightnin’ Slim were frequent visitors. By day he picked cotton and every night he absorbed the sounds of the blues wafting across the street.  At six he had his own guitar, made from a cigar box, and by the time he was a teenager he was proficient on both guitar and harmonica, playing local clubs around Baton Rouge.  His big break came when the legendary Jimmy Reed failed to make a date at an upscale blues club in Arkansas and Leon got to take his place in the band.  He gave a show stopping performance, the crowd loved him, and when, soon after, Jimmy passed away, Leon became Lil’ Jimmy Reed.

Lil’ Jimmy took a break from music to serve his country in the military, but he’s now back playing better than ever.  On his return Lil’ Jimmy has shared the stage with B.B. King and Bobby Blue Bland, among many other stars.  He has also been named Blues Harmonica Player of the Year by the West Coast Blues Hall of Fame and was recently awarded a gold disc by the Alabama Blues Society.

Lil’ Jimmy’s European tours are hugely successful and he has received wild applause and standing ovations as he strolls through the crowds playing and singing his unique brand of down-home blues. His first CD “School’s Out” was rated “Superb” by CD Review

In Lil’ Jimmy’s band, Bob Hall is an award-winning pianist and founder member of several famous British blues bands including The Groundhogs and Savoy Brown. He has accompanied many world-class bluesmen – John Lee Hooker, Howlin’ Wolf, Chuck Berry and Little Walter, to name just a few.  His partner, diminutive dynamo Hilary Blythe, is an outstanding blues and gospel singer and rock steady bassist.