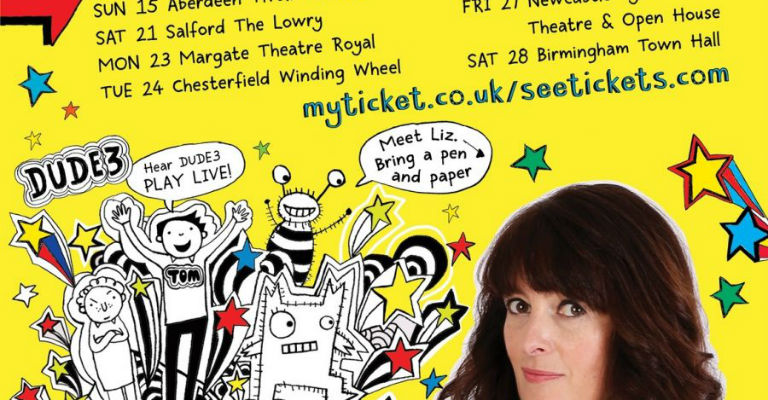 Tickets are priced £16.50 adults, £56 family ticket (Must be booked in advance, limited availability. 2 adults, 2 children or 1 adult, 3 children) (Plus booking fees when booking online or over the phone)

Join Liz as she presents TOM GATES BRILLIANT BANDS AND DOODLE LIVE TOUR, a hugely fun-packed & INTERACTIVE monster drawing event with live music! Bring a pencil and paper, learn to doodle just like Tom and hear DUDE3 Tom’s FAVOURITE band in the whole WIDE world play some excellent tunes. There’s stories and music and a chance to meet Liz and the band after the show – what more do you want? (Wafers…)

Over 3.1 million Tom Gates copies have sold in the UK and the series has been optioned for TV. The first in the Tom Gates series published in the US in 2014, joining over 42 foreign editions currently being enjoyed worldwide. Recent titles in the series, Tom Gates: Yes! No. (Maybe…), Super Good Skills (Almost), Dog Zombies Rule (for now) and Family, Friends and Furry Creatures have been number one bestsellers. Tom Gates Book 13 (title soon to be revealed) is published on 5 October 2017 (published by Scholastic).

Liz Pichon started her career in the music industry, working as an album cover designer and art director before turning her talented hand to the world of children’s books. She lives in Brighton with her husband and three children.

TICKETS ON SALE FRIDAY 11TH AUGUST FROM 10AM