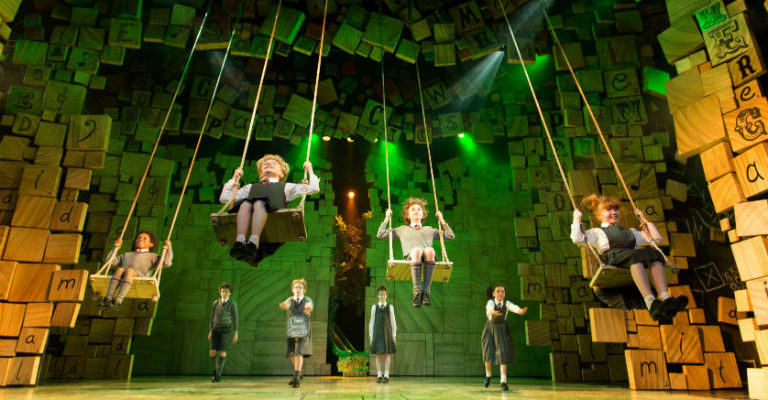 The multi award-winning production of the RSC’s Matilda The Musical is set to make its North East debut at Sunderland Empire in under 6 months with a limited 4 week engagement from Tuesday 8 May – Saturday 2 June 2018. Ticket prices start from £17.50 with current best availability at Monday – Thursday performances.

“We are absolutely thrilled with the sales so far for Matilda The Musical, unsurprisingly we’re seeing audiences come from across the region and beyond.  We are very keen that the residents of Sunderland don’t miss out on what will be a truly memorable production and would encourage them to book their tickets this side of Christmas if they can.  There is still good availability across weekday performances and tickets start at just £17.50”

Winner of over 85 international awards, including 16 for Best Musical, the Royal Shakespeare Company’s touring production of Matilda The Musical will open at Leicester Curve, playing from 5 – 24 March 2018, and will continue to play in the West End at the Cambridge Theatre (currently booking until February 2019).

Inspired by Roald Dahl’s beloved book, Matilda The Musical was commissioned by the Royal Shakespeare Company and premiered at the RSC’s The Courtyard Theatre in Stratford-upon-Avon in November 2010, before transferring to London’s West End in October 2011, where it opened to rave reviews.  Now in its seventh year in London’s West End, Matilda The Musical is the longest running production at the Cambridge Theatre where it continues to play to packed houses.

With book by Dennis Kelly, original songs by Tim Minchin and direction by Matthew Warchus, Matilda The Musical is the story of an extraordinary little girl who, armed with a vivid imagination and a sharp mind, dares to take a stand and change her own destiny.

Matilda The Musical has been seen by more than 7 million people worldwide. Having swept the board at the 2012 Olivier Awards, with a record-breaking seven awards, and winning four Tony Awards and a Tony Honor for Excellence in the Theater for the four girls sharing the title role on Broadway, Matilda The Musical has now played in 60 cities worldwide.

After winning a Sydney Theatre Award for Best Musical in 2015, the Australian production played a sold-out season at Melbourne’s Princess Theatre. In July 2016, the production broke further records by winning all 13 Helpmann Awards for which it was nominated. The tour has now also played in Perth, Adelaide and premiered in New Zealand at The Civic in Auckland in August 2017.

The production will be accompanied in each tour venue by a new education programme, Change My Story inspired by Matilda The Musical. The Sunderland Empire Creative Learning team, will create a bespoke programme for Sunderland in collaboration with the RSC. From a travelling library of workshops inspired by the shows librarian Mrs Phelps, to whole school takeovers of Matilda, and a chance to be involved in further learning, the RSC aims to reach over 15,000 children, in collaboration with its touring theatre partners.

The programme includes a national search for up to 50 Change My Story Champion Schools who will work with the RSC and tour venues, including the Sunderland Empire, to stage special 45-minute edits of Matilda The Musical as school plays. Any state-maintained school can apply, which involves committing to a two-year programme of creative work with RSC and Creative Learning, including professional development and training opportunities for teachers and collaboration with five other local schools to share skills and knowledge.

“We’re very excited to be offering local primary schools the opportunity to connect to the extraordinary world of Matilda. The learning opportunities and resources which coincide with this amazing production are outstanding, and the chance for a longer term relationship with local primary schools over the next 2 years is particularly special, allowing us to continue to develop high quality cultural learning opportunities in schools, and support building new relationships.”