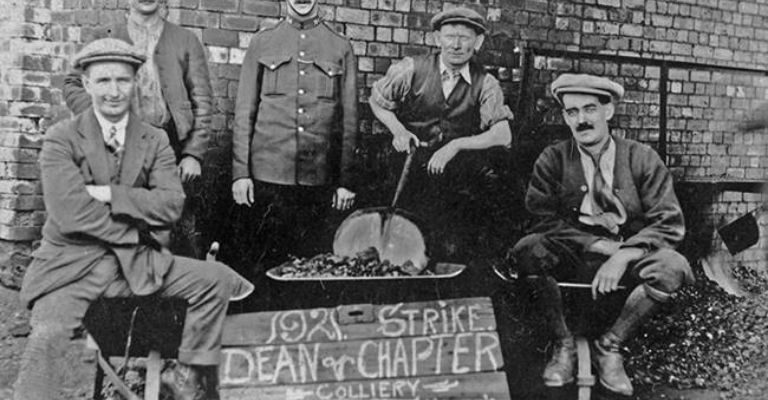 Miners: Pitmen, Pride and Prayer is a new temporary exhibition within Open Treasure, the Cathedral’s exhibition experience in its stunning medieval claustral buildings.  The exhibition showcases artefacts, documents, photographs and stories of the rich mining history of County Durham and North East England.  It opens to the public on Tuesday 19 June to Saturday 15 September.

Durham Cathedral’s world-class exhibition space regularly welcomes temporary exhibitions that tell diverse stories from the Cathedral’s extensive collections. Miners: Pitmen, Pride and Prayer will reveal some of the lives and legacies of the centuries of miners that worked in the local collieries both in and around County Durham.

Durham is often called the ‘Miners’ Cathedral’, and has played an important part in the history and inextinguishable spirit of the local mining communities, which still thrives today with the annual Miners’ Festival Service on Miners’ Gala day each July. Many Bishops of Durham throughout the 20th century have shown support for the plight and struggle of the miners in the North East, and continue to bless the colliery banners at the Miners’ Festival Service. The exhibition illuminates the efforts of Bishops such as Handley Moule, who wrote a miners’ hymn, and David Jenkins, who spoke out during the Miners’ Strike of the 1980s, commending the strength of the community and calling for a humane resolution.

This year marks 25 years since the last County Durham colliery closed. 2018 is also 75 years since the founding of the ‘Bevin Boys’ association, often called the ‘forgotten conscripts’ of World War Two. From 1943, one in ten conscripts were sent to the mines rather than into military service to keep the country provided with coal. This vital work has only been properly recognised in recent years, when in 2007 the Government issued a ‘Veterans’ Badge’ to the surviving Bevin Boys to honour their efforts. Miners: Pitmen, Pride and Prayer will tell many fascinating stories such as these, in a Cathedral built upon several coal seams; both spiritually and physically part of the mining story.

The exhibition includes colliery banners, such as that of the Dean and Chapter Colliery which was at Ferryhill. These beautiful banners continue to hold great symbolic value to individual pits and communities, and continue to be carried at celebrations and events to this day. Visitors will also see original tools, equipment and the innovative lamps that track significant moments in the technological history and development of the industry. Of particular note is the last piece of coal to be mined from the Bearpark Colliery, which closed in 1984, after 112 years of operation.

Mining made North East England a powerhouse of Britain’s industrial success in the nineteenth century, but it was also a dangerous business that claimed the lives of many. The Cathedral itself has a Miners’ Memorial in the Nave, dedicated in 1947 to ‘the Durham Miners who have given their lives in the pits of this country, and those who work in darkness and danger in those pits today.’ Ultimately, it was a community that remains bound together with ‘strength in unity’.

Marie-Thérèse Mayne, Exhibitions Officer at Durham Cathedral, and curator of the exhibition, says, “We are delighted to present Miners: Pitmen, Pride and Prayer as the latest in our series of Open Treasure temporary exhibitions. It comes at a key moment in the history of mining, and there are many fascinating artefacts and documents for visitors to enjoy and discover. The exhibition perpetuates the lasting legacy of hard work, sacrifice, and dedication of many, and allows a new generation of visitors to learn about an integral part of the region’s history.”

Durham Cathedral’s Education Team has been working with communities within the Trimdons in County Durham and local artist Wendy Stoker from MADE in England on an intergenerational project.  Workshops were held at St Williams RC Primary School, Deaf Hill Primary and Infants School and Bluebell Meadow Primary School; and at Trimdon Community College creating artwork exploring the history of coal mining, alongside rag rugs.  The work will be on display in the Community Gallery within Open Treasure as part of the exhibition.

The Trimdons are around 10 miles east of the Cathedral in County Durham, and are a group of villages that included Trimdon Village, Trimdon Grange, Trimdon Station and Deaf Hill.  Within this small area were multiple coal mines, the last of which closed in 1968.  The mines shaped the area, its people and the landscape.  The project has brought together children and young people; and older generations who have communicated what the coal mining industry meant to them.  This project was supported by the East Durham Rural Corridor Area Action Partnership.

Miners: Pitmen, Pride and Prayer will be open to visitors from 19 June to 15 September. As a temporary exhibition, it will enhance the Cathedral’s permanent exhibitions in Open Treasure which explore 2000 years of religious history in the North East, telling the story of Durham Cathedral, and reveals the beauties of the Treasures of St Cuthbert, a stunning collection of some of the UK’s most important Anglo-Saxon artefacts that are housed in the newly-restored 14th century monastic Great Kitchen.  Open Treasure was made possible by National Lottery players through a Heritage Lottery Fund (HLF) grant, and other funders, including the Friends of Durham Cathedral.