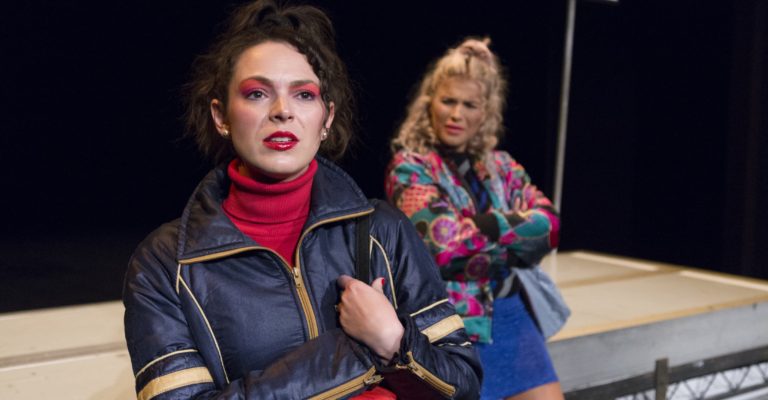 Miss Crispy 1988 tells the story of a group of female friends whose working life at a Teesside crisp factory is turned upside down when they are invited to enter a beauty contest.

The production is set to entertain audiences at Durham’s Gala Theatre at 7.30pm on Friday 17 January and is inspired by the stories of workers at The Crispy – the nickname given to the KP crisps factory in Billingham.

The factory was a major employer in the area in the 1980s and theatregoers can look forward to big hair, legwarmers and plenty of Northern wit in this nostalgic yet moving comedy about female friendship, love and overcoming adversity.

Miss Crispy 1988 was written by David Tuffnell and is produced by Less is More, a Middlesbrough-based theatre company with a passion for telling stories from working-class communities.

It received rave reviews when it first toured the region in 2013, and the Less is More team cannot wait to bring the show to the Gala.

The theatre is close to the heart of the play’s director Laura Lonsdale, who is currently appearing as the genie in this year’s Gala pantomime, Aladdin. Laura previously taught at the Gala Theatre Stage School and has gone on to cast many former students in the shows she has directed over the years.

Laura, from Middlesbrough, said: “It’s always a joy to come to the Gala Theatre. County Durham audiences are a pleasure to perform to and I know they will love Miss Crispy 1988. It’s the tenth anniversary of Less is More this year and what better way to celebrate than to tour a show that epitomises what we are all about; honesty, drama and humour.”

David added: “I think Miss Crispy has received such a positive reaction because it’s a story that is set in our region with characters people can relate to. Those of us who lived through the 1980s will enjoy the sense of nostalgia it evokes – the music, the clothes, the big perms.

“However, the 1980s were also an important period in history and a time of great change, especially for women. This is explored in the play through the thoughts, experiences and ambitions of five unique but very relatable female characters.”