Opera North / The Girl of the Golden West 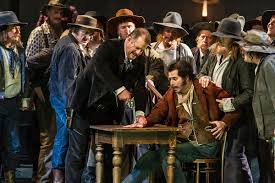 Set against the backdrop of the tough life of a gold-mining community on the American frontier during the California Gold Rush, this opera has been called the original Spaghetti Western. It boasts what is perhaps Puccini’s most innovative score, and surely his richest orchestrally.

His peerless melodic gift and capacity for creating local colour is a perfect match for this tale of a love triangle involving Dick Johnson, aka the bandit Ramerrez, Sheriff Jack Rance and Minnie, the Girl of the Golden West (‘La fanciulla del West’) who runs the Polka saloon. Antony Hermus, who conducted electrifying performances of Tosca in 2018, conducts Aletta Collins’ widely admired production.

Sung in Italian with English titles