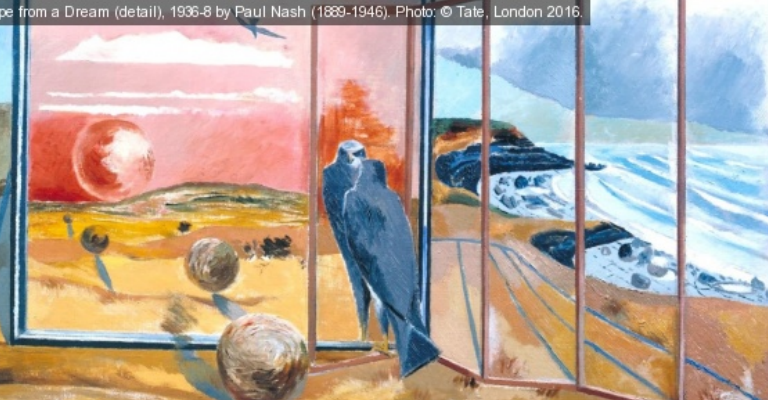 Admission charges will apply to this exhibition

Paul Nash (1889 –1946) was one of the most distinctive British artists of the 20th century and was a key figure in British Surrealism. His art forged an important new connection between surreal and mystical ideas and the English landscape. This significant exhibition spans Nash’s lifework, from his earliest drawings and the iconic war paintings to his powerfully emotional final landscapes.

Nash had a strong attachment to Britain’s countryside and coast, and was fascinated by its ancient history. Landscape painting was a major feature of his art, evolving from dreamlike scenes to intense encounters with particular places and explorations of ideas from Cubism, Abstraction and Surrealism. These qualities also shaped Nash’s paintings of interiors as well as the prints he made as book illustrations. His shattered landscapes are some of the most striking pictures of the First and Second World Wars.

The exhibition includes a fascinating array of photographs and surreal objects, assembled as sources of inspiration by Nash and artist Eileen Agar, with whom he collaborated in the 1930s. Nash was a founding member of the British modernist group Unit One in 1933, and participated in the International Surrealist Exhibition of 1936. Pictures by Nash from this key moment in British modernism are on display alongside sculpture and paintings by fellow Unit One artists, including Barbara Hepworth, Henry Moore and Edward Wadsworth.

The exhibition concludes with the evocative landscape paintings that Nash produced in the last decade of his life. In these important pictures, the sun and moon are symbolic presences, and vibrant colour conveys Nash’s emotional response to the landscape.