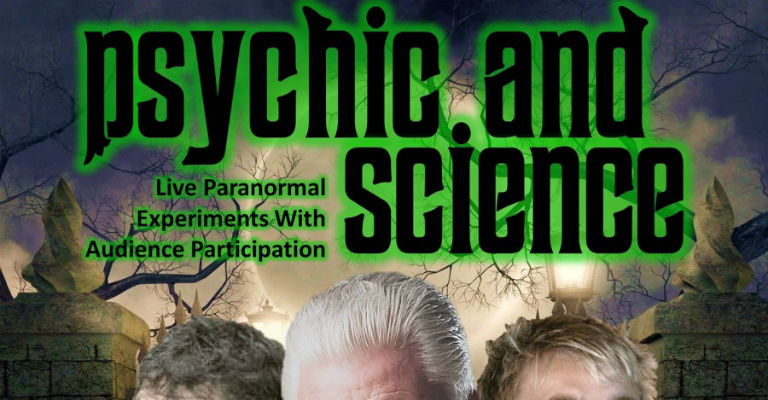 This show is new and innovative and stars the Godfathers of the Paranormal – the incomparable and renowned RICHARD FELIX, Ghost and Scientific Historian and the phenomenal, world acclaimed Spirit Medium, DEREK ACORAH.

Derek and Richard have worked together for the past ten years and are known worldwide for their appearances together on the ground-breaking television programme MOST HAUNTED where they fast became the stars and made their own mark on this globally renowned show.

Psychic & Science is unparalleled in the paranormal investigative field. Richard and Derek join together live on stage in an attempt to prove the existence of residual spirit energies and life after death using a combination of Derek’s finely honed mediumship skills and Richard’s unique Stone Tape Projector. The evening commences with a short demonstration of mediumship by Derek and is then followed by Richard’s very controversial theories on what ghosts really are. Members of the live audience are then invited to join Richard and Derek on stage to take part in various experiments including the Human Pendulum, Table Tilting and Glass Divination. There are lone vigils and many other paranormal investigations – all guaranteed to have the audience sitting on the edge of their seats as events unfold. The grand finale of the show is the amazing “Stone Tape Projector”experiment in which each and every audience member can take part in an attempt to capture images on camera of people who have long disappeared into the history of our haunted heritage. Some amazing results have already been experienced.

The show is hosted by Edd Felix, who even though a sceptic himself, has been heavily involved in the world of the paranormal for over fifteen years.