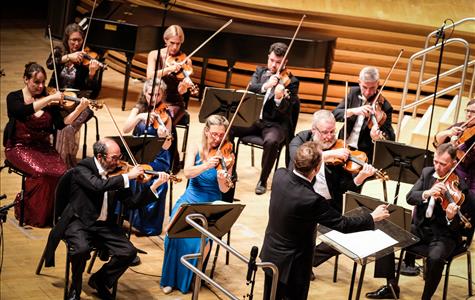 A selection of Royal Northern Sinfonia players will be at The Maltings this November to continue their recital programme with Stamitz, Britten, Elgar, Mozart.

Stamitz completed the Oboe Quartet in 1773 for the Paris Music Society. It was initially written for clarinet, but the oboe part was written to increase sales. It is subtle and tender to start, before a lively finale based on folk melodies.

Britten’s five-movement String Quartet No.3 is his latest completed major work, written during his years of illness. Each movement is in ternary form, and the work explores all six possible relationships between four instruments in a quartet.

Written around 1878 when Elgar was just 21, the Andante and Allegro for Oboe and String Trio was one of his earliest works, probably written for performance at Worcester Glee Club, but was only published in recent years having been discovered in a folder at the British Museum.

Elgar Andante and Allegro for Oboe and String Trio

The orchestra regularly flies the flag for the region at major festivals, including the BBC Proms, most recently performing Handel’s Water Music at Stage @theDock in Hull – the first Prom performed outside of London since 1930. They appear frequently at venues and festivals in Europe, and in recent seasons have toured to Vienna, Budapest, Istanbul and Tokyo.

RNS has always been actively involved in local communities and in education. This season the orchestra will perform across the region in Kendal, Middlesbrough, Carlisle, Berwick and Sunderland, and will once again take their Christmas by Candlelight tour to regional churches. Musicians support young people learning musical instruments through Sage Gateshead’s Centre for Advanced Training and through In Harmony, an immersive orchestral music-making programme improves the life chances of children and young people in the West End of Newcastle, by increasing confidence, wellbeing, resilience and educational attainment.