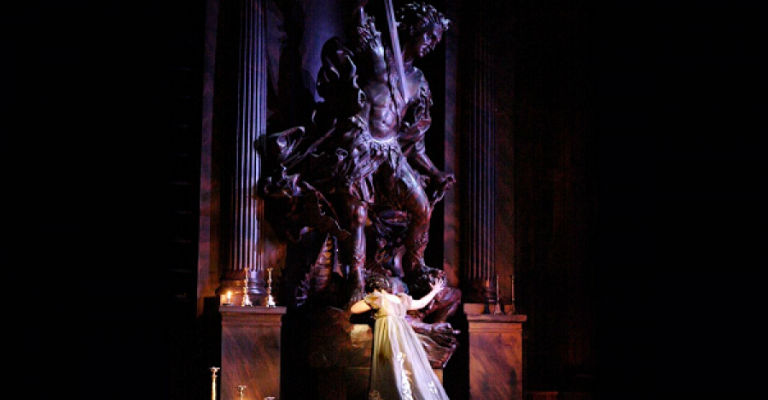 Tosca is one of the great evenings of opera, and from its strident opening chords conjures up a world of political instability and menace.

Jonathan Kent’s production for The Royal Opera captures the dangerous political turbulence of Rome in 1800. The Chief of Police, Scarpia – one of the most malevolent villains in opera – ruthlessly pursues and tortures enemies of the state. His dark, demonic music contrasts with the expansive melodies of the idealistic lovers, Tosca and Cavaradossi, who express their passion in sublime arias, including ‘Vissi d’arte’ and ‘E lucevan le stelle’. Giacomo Puccini’s dramatic work was a hit with audiences on its 1900 premiere and it remains one of the most performed of all operas – with its gripping plot and glorious music, it’s easy to see why.

A candle-lit church, Scarpia’s gloomy study with its hidden torture chamber and the false optimism of a Roman dawn: this handsome production throws into relief the ruthlessly taut drama, as the tension is wound up towards a fateful conclusion. Puccini’s meticulously researched score is infused with the same authentic detail, from distant cannon fire during the Act I Te Deum to tolling church bells and the sounds of a firing squad.