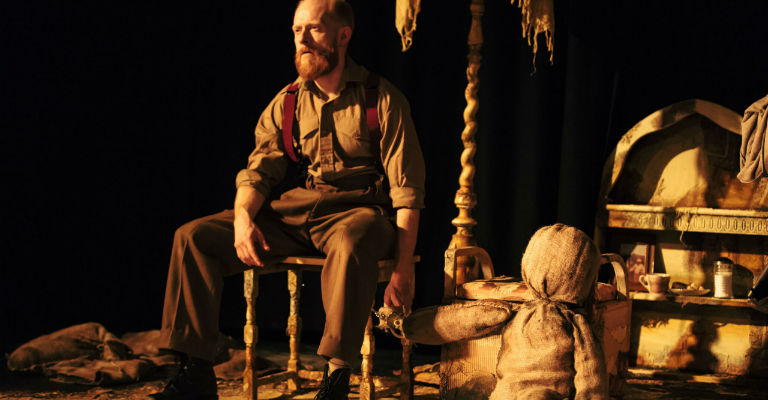 1941. Egypt. WWII. An escaped German officer. A two day chase across the brutal Sahara. A triumphant capture. A hero’s return.

1991. England. Jack reigns from the armchair of his rest home, a local legend. Decorated veteran of Tobruk. Former river warden, boxer, horse whisperer, boat builder, charmer, prolific father and husband to a very unhappy wife. Memories are, by his own hand, tattooed on his body but dementia is eroding his mind. As the Gulf War rages, the past drags him back to the scorched sands.

Following its critically acclaimed debut at this year’s Edinburgh Festival, this is a true story inspired by the writer’s grandfather.

With striking theatrical invention and imaginative visual physical theatre the play tells the tale a World War II veteran and follows his mind sinking into the sands of time.

“a powerful play that captures the horror of war and the disorientation of dementia.” Britishtheatre

“one of the most complete theatrical experiences at this year’s Fringe.” Edinburgh Guide

“Actor Robin Berry is riveting, his stage presence is captivating from beginning to end” The Upcoming

BITESIZE drama is a great way to enjoy great new short plays with great food from The Little Angel Café. Your BITESIZE ticket covers the show, accompanying food and a drink of your choice (available from 1 hour prior to the show).