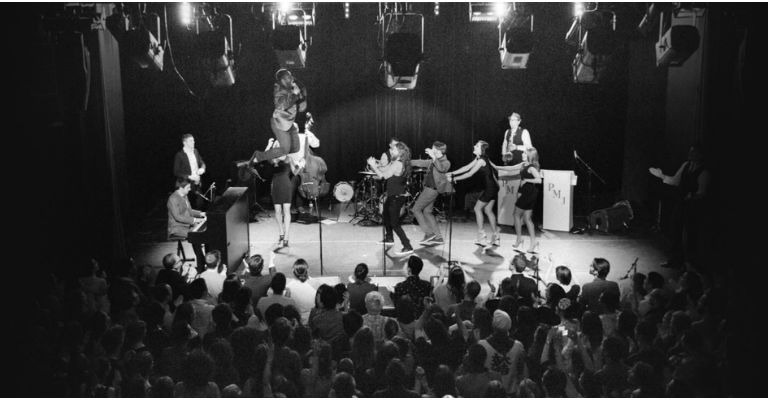 Postmodern Jukebox, the ever-growing collective of performers – now with a roster of over 70 rotating cast members – has spent the past few years amazing nearly 500 million YouTube views and 2 million subscribers, performed on Good Morning America, topped iTunes and Billboard charts, and played hundreds of shows to packed-houses around the world. As NPR put it, they’ve done this by taking current Top 40 hits and re-imagining them as coming from older eras of popular music. In one such remake, Postmodern Jukebox turned Miley Cyrus’ We Can’t Stop into a doo-wop ditty that’s garnered over 15.8 million views. Last year, Bradlee arranged Radiohead’s alt-rock hit Creep as a torch-like ballad that’s racked up over 19.5 million views and was named one of the 9 Best Viral Cover Videos of 2015 by People magazine. Multi-Grammy winning artist Lorde praised Postmodern Jukebox’s vintage take on her hit single, Royals, which has been viewed over 15.9 million times, as her favorite. PMJ recently performed a 30s jazz remake of Elle King’s Ex’s & Oh’s for MTV UK – click HERE to watch.

Bradlee, the creator and mastermind behind the group, has turned Postmodern Jukebox into a juggernaut by building an incredible grassroots movement around the act. He continues to pick the songs, create the arrangements and shows, and put together the casts for every tour – which includes several notable names alongside some phenomenal “undiscovered” talent. The group releases a new video every week, each one shot in the casual environment of Bradlee’s living room. A very busy man these days, Bradlee splits his time between producing new videos in Los Angeles and traveling the globe to manage his tours.