Shelf Life – The Ornaments Are Talking To Me 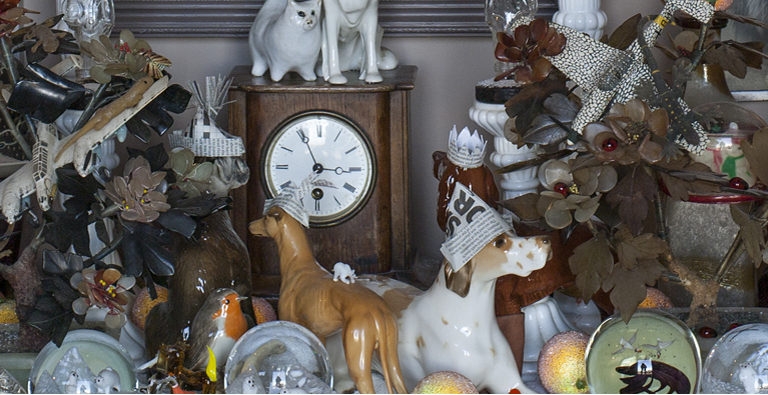 Mark Clarke’s latest piece of work, a collection of five painted, crowded shelves explores and examines the themes of life, love and loss.

‘When I was clearing out the family home in Northern Ireland following the death of my mother from Alzheimer’s I was intrigued to find how the positioning of her much loved, seemingly ephemeral mantelpiece ornaments appeared to display a puzzling sense of shared social hierarchy with the placement of each accommodating a definite power structure, theme and look.

Alzheimer’s is a progressive disease yet somehow through the fog of confusion, isolation, language and speech problems, loss of dignity, paranoia and diminished memory my mother was able to create a small recognisable world. Sufferers are often homebound during the middle and late stages of the disease and this is when she made her shelves. Trying to make sense of this thinking was the poignant source for this series of assemblages.’

The shelves created by Clarke are not a literal translation but a poetic interpretation of his mother’s homemade shrine; a tribute to vanished memory and impermanence that question our individual notions of value, worth and meaning. A melee of modern day memento mori layered with suggested nuance, heartfelt sentiment and some wit.

The title SHELF LIFE highlights the indeterminable length of a life, the sell by date beyond which we ourselves become unfit for purpose. The installation also explores the concepts of good and bad taste, collecting, the length and dismantling of a life, fine art versus outsider art, displacement behaviour, celebrity culture and obsession.

MARK CLARKE
Belfast born Mark Clarke is an assemblage artist known for his complex 3D narratives that are a collage of anachronistic cultural references. Notable works include Clarke’s Cabinets of Cures commissioned by Wellcome Collection, Belfast Boy: Clarke’s Cabinet of Home, Heart and Hearth for The Holburne Museum and Clarke’s Cabinet of Eyries for Alexander McQueen.

Clarke studied Visual Communications at Edinburgh College of Art. After graduation he worked on a wealth of media titles from The Guardian to Honey magazine. In the 1990’s he contributed to many TV and film projects with clients including Dreamworks Productions, BBC and Carlton Television.

In 2009 he relocated to the west country to concentrate on more long-term art based projects. He works out of his studio overlooking Bristol and divides his time between his Somerset home, London and his native Belfast.