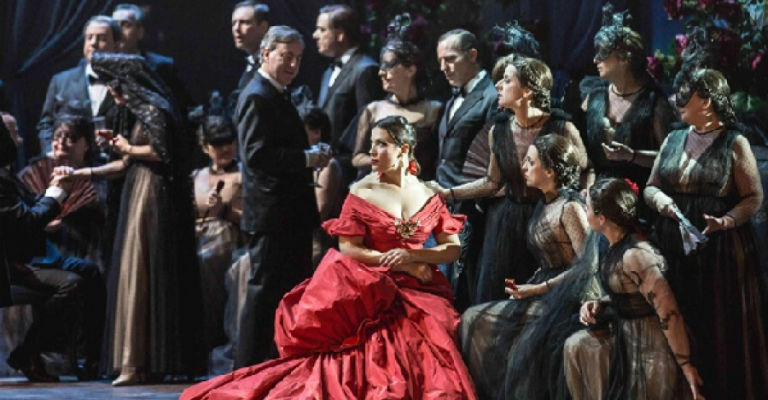 Haute Couture meets Hollywood as acclaimed director Sofia Coppola and designer Valentino combine their talents to bring you one the most ambitious productions of La Traviata to date. Coppola brings new life into Verdi’s 1853 classic opera that tells the story of tempestuous love and heartbreak. Coppola’s La Traviata has already become one of the most successful productions in its history immediately selling out its 15-performance run in Rome. Now, this elegant spectacle is being brought directly to the big screen captured in glorious 4K with over 100 microphones live from Teatro dell’Opera di Roma.
Bringing on board a host of critically acclaimed talent including British production designer, Nathan Crowley whose works include; Batman Begins, The Dark Knight and Interstellar to create a beautiful, daring minimalist style.  Oscar nominated cinematographer Philipe Le Sourde brings his skills behind the camera to help bring the production to life on the screen.
Thanks to Coppola and Valentino a new audience can be captured and share the experience of witnessing the classic opera of doomed love as it was meant to be seen, on a larger than life scale surrounded by an audience who will be left in awe.
Food will be served from 6pm. Tonight’s Supper Club will be lasagne. A vegetarian option is available. Please let us know if they are any other dietary requirements in your group.