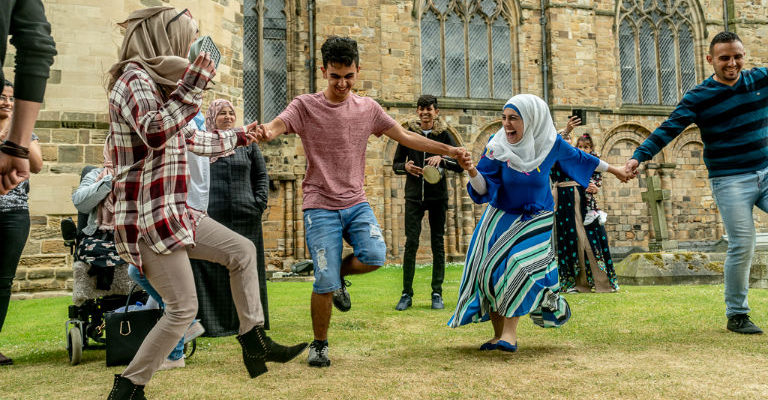 Stories of Sanctuary captures the heart and soul of the stories of people seeking sanctuary, both past and present, through spoken word and song. The performance piece showcases new songs that were written by participants from different backgrounds, including Syrian refugees, in summer workshops facilitated by Durham-based folk singer-songwriter Sam Slatcher.

The performance brings together a thousand years of Durham’s history of sanctuary – from the arrival of an exiled monastic community carrying the body of the much loved Saint Cuthbert in the 10th century, through to recently arrived refugees from the civil war in Syria. The songs will be performed by Sam and guest musician Raghad Haddad, viola player from the Syrian National Orchestra, as well as some of the participants from the workshops.

The songs will also appear on a new album that has been recorded by Sam along with Raghad, multi-instrumentalist Paul Martin, and participants from the workshops singing and performing on the songs. The album has been produced by music producer Ron Angus at Studio One, County Durham. The songs platform enchanting messages of peace, brought alive by a fusion of different musical styles including medieval music, contemporary folk/jazz, as well as traditional Syrian folk music. ‘Stories of Sanctuary’ will be released in the autumn.

The project is funded by the National Lottery via the Arts Council’s Grants for the Arts programme.