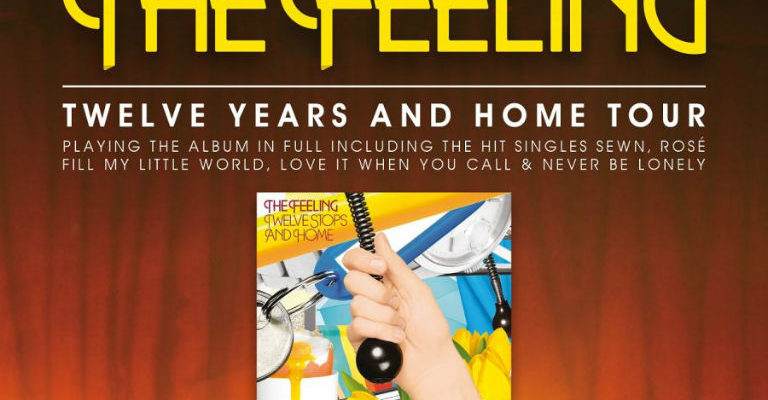 Following the success of their very special intimate performance at London’s Apollo Theatre at the weekend (which sold out in under a minute), The Feeling have announced that they will perform their celebrated million-selling album ‘Twelve Stops And Home’ in full across the UK this October, the band’s first tour for over two years.

The Feeling have also announced the reissue of Twelve Stops And Home, to celebrate 12 years since the acclaimed album’s release.  Having been newly mastered from the original tapes, Twelve Stops And Home will be reissued as a Deluxe 3CD + DVD digibook, and a limited edition double yellow vinyl.

Twelve Stops And Home – named after the Piccadilly Line journey from Leicester Square to Gillespie Sells’ home stop of Bounds Green – was originally released on 5 June 2006. Despite being largely self-recorded in the garden shed of Ciaran and Kevin Jeremiah’s parents’ Sussex home, the album was a hit-the-ground-running masterpiece of fiercely infectious, life-affirming pop, pitched in the rainbow-coloured realm between Queen, the Scissor Sisters, ELO and Supertramp.

Five of the album’s big-hearted and velcro-catchy songs became bona fide hit singles (Sewn, Fill My Little World, Never Be Lonely, Rose and Love It When You Call), helping the band to become the most-played act on British radio in 2006, and earning them the Ivor Novello Award for Songwriters of the Year.

Dan Gillespie Sells said: “I’m so excited to be playing with the band again. To be performing an album that has always meant so much to me is going to be quite an experience! What a party it’s going to be!”

The Feeling Meet and Greet VIP tickets include:

Ticket for the event in the best seats
A unique opportunity to meet The Feeling before the venue opens
Have your photo taken with The Feeling by the VIP Manager
Receive a pre-signed photo of the band
Collect a custom VIP laminate and lanyard
Package Price £85.50 (Ticket FV £35.50)