We Are The Lions, Mr Manager 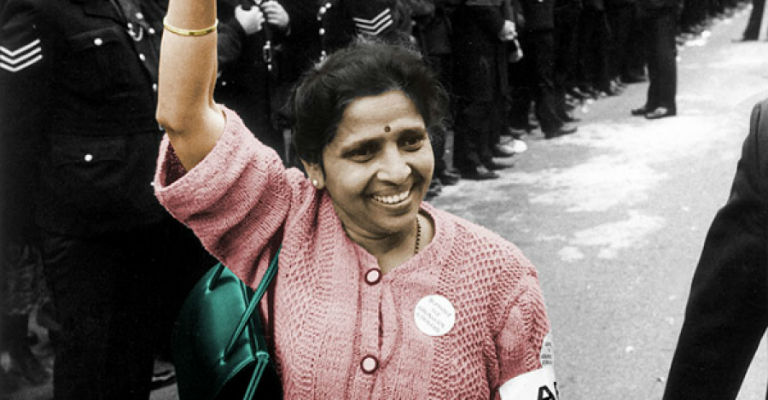 ‘We Are The Lions, Mr. Manager!’ is the story of the Grunwick Film Processing Factory Strike of 1976-78 and the inspirational strike-leader Jayaben Desai, one of many newly arrived British passport-holding Asian Gujurati workers expelled from Uganda and Tanzania in East Africa four years before.

In 1976 a group of workers in a backstreet London factory, in Willesden, stood up to their bosses and kick-started one of the longest and most important industrial disputes in British history. Led by Asian women, the Grunwick strike challenged stereotypes, changed the face of traditionally white, male trade unions, and inspired others to speak out against injustice.

Grunwick wasn’t just a strike about wages and conditions – it was about something much more important than that: it was about dignity. Dignity at work. These women had been employed by the Grunwick factory bosses in the belief that they would be easy to handle, to browbeat and to exploit. Yet, they found their own distinctive voice in the course of the struggle to secure their rights.

The strike leader, Jayaben Desai had the measure of the most brutish and charmless of her managers, when she told them: ‘What you are running here is not a factory, it is a zoo. But in a zoo there are many types of animals. Some are monkeys who dance on your fingertips, others are lions who can bite your head off. We are the lions, Mr. Manager!’

1. it focused the issue of the exploitation of immigrant workers
2. it nailed the myth that Asian workers were passive
3. it showed how a section of totally unorganised workers, ignorant of trade unionism and insecure in a foreign land can develop militancy and attract huge solidarity
4. it defined the trade union and political lives of tens of thousands from across the nation who came to the streets of Willesden to back the Grunwick workers.
5. it showed too that all the forces of the state, the media, the police, the courts, employers, racial prejudice and women’s inequality can be swept aside by the freshness and dynamism of determined struggle.

This is social history presented in Townsend Productions’ imaginative, particpatory, engaging style with songs and music of the 1970s.

Grunwick still poses questions to today’s generation about the role in society of women, workers and immigrants. And the strike still carries a challenging message about the need for human dignity.

Brought to us by Highlights Rural Touring Scheme