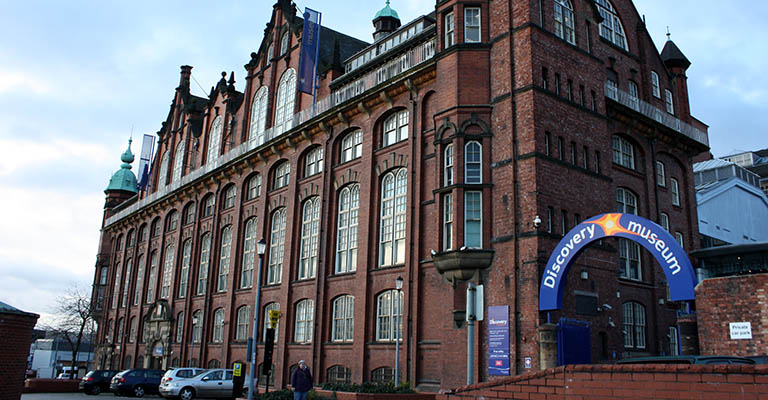 Discovery Museum started life in Exhibition Park, Newcastle in 1934 as the Municipal Museum of Science and Industry, the first science museum outside of London. It was housed in the temporary pavilion that was built for the 1929 North East Coast Exhibition.

As you enter the museum you’ll come face to face with Turbinia. Charles Parsons’ 34 metre steam powered ship that was once the fastest ship in the world and an iconic part of the history of Tyneside.

Immerse yourself in the history of Newcastle and Tyneside told through permanent displays and temporary exhibitions over three floors focusing on the area’s martime, scientific and technological importance to Britain and the rest of the world.

On the ground floor you’ll find the temporary exhibition space as well as Newcastle Story which takes you on a journey through the city from the Roman times to the early millennium. The ground floor is also home to Tyne & Wear Archives and the museum gift shop.

The first floor delves further into Tyneside’s industrial and martime past with Working Lives, Tyneside Challenge, Story of the Tyne and A Soldier’s Life. Our under sevens water play area Play Tyne can also be found on the first floor.

The second floor is home to Turbinia Cafe where you can enjoy a refreshing drunk and snack overlooking the Turbinia and Story of the Tyne gallery. You can also see some of the steam engines of the collection in action as well as exploring the world of science in the interactive Science Maze. Also on the second floor is Destination Tyneside, the UK’s only permanent dedicated gallery telling the story of migration of those who have made Tyneside their home.