Posted on May 6th 2016 by Whats on Northeast 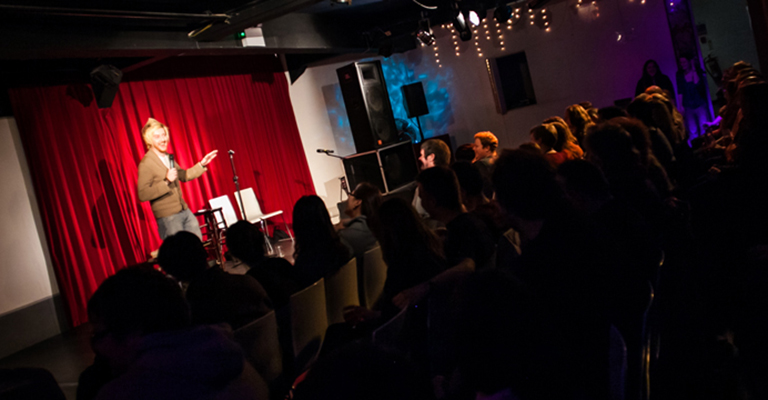 The recent news that the NERC are wavering on naming their shiny new research vessel RSS Boaty McBoatface may have given the impression that scientists can’t take a joke. Bright Club proved however, from this sample size at least, that they can certainly dish them out.

Billed as “the thinking persons variety night”, Bright Club temporarily takes academics out of their usual habitat of labs and lecture theatres and puts them on a comedy club stage with microphone cheap jerseys in hand. It’s a chance for them to give a window into the real world of academia in a very different format than the norm, and in doing so provided us in the audience with a hilarious but also fascinating insight into their areas of research.

Over the courses of two hours, five academics from a range of fields of study, took us on a wild ride through topics as diverse as crustacean releations (Kirsty Lees), a sheep named Montauciel floating in a hot air balloon (Matt Williamson), the complications of artificial pig insemination (Becky King), human objectification (Paula Wright), and my personal highlight… the mysterious blockage of the toilet system at Claremont Tower and the ensuing “reply 美容サプリは長く続けよう all” email chain (Matt Wood). I would also be willing to bet Ways that it was the first time an audience at The Stand Comedy Club had Geh witnessed a levitating teabag, and that it was the first time the line “That’s density as in population density rather than mass per unit volume” had been uttered on its stage.

As you may have gathered from some of the subjects of discussion listed in the previous paragraph it certainly warranted the “Adults Only: 18+” line on the promotional poster. It was all in good spirits though and they utilised their intellect and wittiness to deliver the laughs rather than being reliant on over-the-top swearing (mostly!).

The evening was equal parts fascinating as it was funny… And it was really, really funny. What really stood out from their stand up though was their enthusiasm Hello for their area of research, which was far more interesting The and inspiring than any journal paper Darlington or dissertation I’ve ever read. It made their research seem much more accessible and relatable. The whole night was knitted together seamlessly by Sarah Bennetto, the Aussie Born, London living, compere who kept the audience enthralled with her anecdotes of pseudo-infidelity, found furniture, small town dating, and her deep appreciation of the British sense of reserve.

Bright Club Newcastle is organised by the Centre for Life in collaboration cheap jerseys with Newcastle and Northumbria Universities. It returns to the Stand Comedy wholesale MLB jerseys Club on 7 June 2016 – advanced booking recommended via The Stand Comedy Club.