Posted on October 10th 2022 by Whats on Northeast 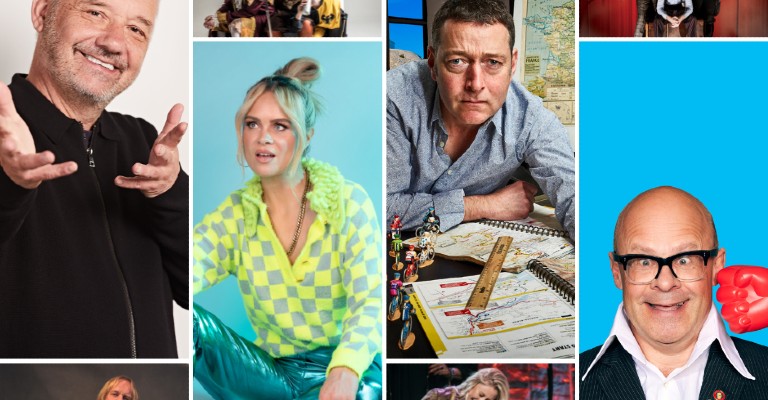 The beautiful grade one listed venue is the perfect place to relax and enjoy one of many fantastic shows with friends and family, and theatre tickets also make a fabulous gift – perfect for birthdays and something to keep in mind for the upcoming Christmas season…

A real highlight of the Theatre’s programme is the wide range of big comedy names. Fingers and Fringe are putting on a hilarious ‘Night at the Theatre’, hosted by Jarred Christmas and featuring Reginald D Hunter, Rachel Fairburn, Fern Brady, Daliso Chaponda, Scott Bennett and Louise Young – so many great comedians in just one night! Also stopping off at the Theatre as part of brand-new tours are Harry Hill, Dave Gorman, Joanne McNally and Luisa Omielan. The beloved Bob Mortimer will be thrilling audiences in his sold-out conversation event with actor Charlie Higson, celebrating the launch of his new book The Satsuma Complex. Local talent Sarah Millican, Matt Reed and Gavin Webster are also taking the stage in the coming months with hilarious shows not to be missed.

And what’s a Theatre without… Theatre? This autumn brings some fabulous literary-inspired productions: an adaption of Oscar Wilde’s The Canterville Ghost, and Sh*t-faced Shakespeare will be performing Macbeth with an entirely sh*t-faced cast member. Musical theatre fans will be happy to hear that Starlight Theatre Productions will return for the Theatre, bringing Kinky Boots to the Tyne Theatre this November, following a string of successful musicals, including ELF, Chitty Chitty Bang Bang, and the critically acclaimed Wind in the Willows.

The Theatre boasts impressive natural acoustics, which are used to their full advantage during the many music shows it hosts. Upcoming autumn shows include Gary Barlow with his show ‘A Different Stage’, Howard Jones with Nick Beggs and Robin Boult and the #1 Billboard Blues Artist Joanne Shaw Taylor. Tyne Theatre Productions are putting on RENT in Concert following a very successful run of RENT earlier this year, which will be a massive treat for audiences.

Alongside Bob Mortimer, the Theatre has many fascinating In Conversation events coming up over the next few months. For the thrill-seekers, Levison Wood, Sir Ranulph Fiennes and Jason Fox will be sharing their adventures with captivated audiences. And for those who enjoy hobbies closer to home, the Theatre has plenty of events too: for the gardeners, an Evening with Monty Don, for the crafters, Craft Your Christmas with Sara Davies, and for the Bakers, there’s Prue Leith in the new year.

And, as always, there’s plenty of shows suitable for the whole family: the biggest being the Theatre’s Christmas Panto, Beauty and the Beast, on between the 9th December and 8th January. For the little ones, adaptions of The Smartest Giant in Town and Room on the Broom will be playing at the Theatre in the new year.

Theatre Director Jo Johnson said: “We are thrilled to be offering our audiences such a huge range of shows, spanning multiple genres, with something for everyone. This is always the busiest time of our programming year and we’re delighted that we’ve put together such a high-quality selection of shows! It’ll be great to see familiar faces returning to our stage, but we’re also looking forward to welcoming some new up-and-coming talent to our beautiful venue.”