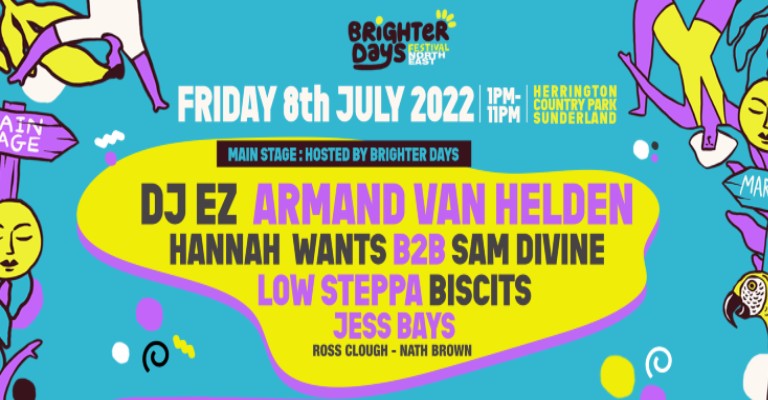 Headlining the mainstage is world-famous DJ and Producer Armand Van Helden and the legendary DJ EZ, widely – and rightly – regarded as one of the most talented DJ’s to grace the planet. Joining them on the mainstage will be the incredible Hannah Wants, with a very special ‘festival first’ as she goes in for a B2B set with the Queen of Defected Records Sam Divine. Another Defected favourite, Low Steppa will be taking to the mainstage decks for a killer house set and will be closely followed by the likes of Biscits, Jess Bays, Ross Clough and Nath Brown.

The big-top tent will be home to the Bass stage, hosted by Rush, and will see a number of hard hitting fan favourites take to the stage such as the legendary Crucast gang – with sets from Darkzy and Window Kid, Skepsis, Kanine, Zero, Cajama, Lazcru and MC AD. Special guests on the day will be Kingpin Producer & DJ Macky Gee and the group that are currently taking the world by storm.. The huge Bad Boy Chiller Crew will be making an appearance which will undoubtedly have the crowds going crazy on the day, along with in incredible TQD.

Disco fans will no doubt be spending their day at the Beat Boutique & Soul Heaven stage in the marquee. Unveiled on the monster disco lineup so far is the amazing Kenny Dope, House & Disco legend Dave Lee ZR, Kings of Tomorrow featuring Julie McKnight – well known for their HUGE hit ‘Finally’, Glitterbox royalty Melvo Baptiste, disco Queen Natasha Kitty Kat and they’ll also be joined by Peverell, David Dunn, Lady V and Callum Smith. Not forgetting a VERY special headliner that is yet to be unveiled….

Last but certainly not least is the House and Tech stage located in the circus tent! Hosted by MODE, they’ll be welcoming the likes of the unmissable Richy Ahmed, Ibiza and house music legend Darius Syrossian, minimal tech and house masters East End Dubs, Jasons, providing infectious golden grooves will be Sorley, and of course the incredible Fleur Shore. Warm ups will be looked after by Jordan and Curtis Graham.

It’s shaping up to be an unforgettable weekend that dance music fans & festival-lovers simply do not want to miss out on. With another phase of acts still to be announced, this event is expected to sell out well ahead of the event date.

The team behind Brighter Days have already hosted multiple sell out one-day events in the North East, bringing world-class acts such as Patrick Topping, Mele, Mella Dee and many more to their more recent event under the Mode alias at Rainton Arena.

By registering on their website, you can gain access to exclusive pre-sale tickets that will be on sale ahead of general tickets and will be offered at a discounted price. This event is expected to be a total sell out – with a record number of sign ups already recorded since pre-sale went live earlier this month. Pre-sale tickets will go on sale in the coming days, those who sign up for discounted pre-sale ticket access will be notified of the onsale date. General sale will follow suit a few days later.