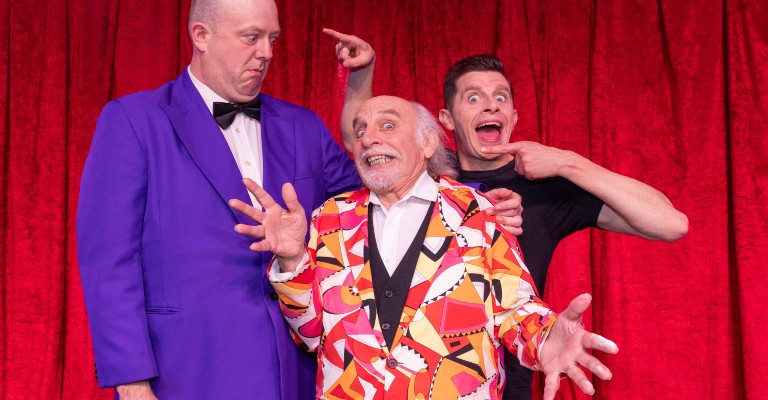 Aptly named ‘Acciderrrnt’ after Danny Adams’s famous comedy catchphrase, this year will see the kings of comedy take on new routines never been seen before – including a daredevil act where Danny plays Captain Splat – the human cannonball!

The family trio, who all star together in CBBC’s Danny & Mick, and have headlined the Theatre Royal’s annual Christmas pantomime 18 years, say no-matter how long they have been performing, or how many shows they do, they always strive to bring something new to the stage.

Dad and ‘head-of-the-family’ Clive Webb, said: “Every year we have to top the last and this year will be the biggest and best so far. It is a high-energy circus show with crazy comedy, a lot of slapstick and daring stunts in there, too.

“We have over 100,000 people come to see us at the panto every year, but they might not be as familiar with the Cirque Du Hilarious shows. The panto stories are always traditional Christmas entertainment, whist offering something spectacular, too.

“The circus is spectacular in its own way with the speciality acts, magic and live band – as well as silly slapstick, crazy magic and off-the-wall situations that we are known and loved for.

“We are always thinking about new routines and looking for inspiration for our shows, all of the time. Someone will say something funny and we trigger each other off and we will just add to it and add to it.

“Danny is very quick-witted and often comes up with ideas and sayings and Mick is very good at the off-the-wall comedy situations.

“When we are travelling on the road there is nothing to do apart from come up with new material! Because we are family, we know what the other is thinking and naturally bounce off each other, as well as push the boundaries! We don’t always stick to the script, but we are always thinking along the same lines.”

Clive, who hails from Sunderland and has worked in entertainment for almost 60 years, has been reflecting back on his time working with sons Danny and Mick. He added: “Danny joined me in showbusiness after he left school, originally touring with Count Duckula where he played the part of Baron Von Goosewing – which annoyed him a little bit as nobody saw his face! It was then that we began Cirque du Hilarious.

“Mick studied music and went to Manchester University and after qualifying started playing in bands, he eventually saw the error of his ways and joined in with Cirque – hence the beginning of our own band Clownforce. We hold the dubious record of never playing a number to its conclusion before some disaster stops us!

“In the 25 years that Cirque Du Hilarious has been in operation we have had numerous guest artistes, we are truly unique in what we offer.”

Danny and Mick are currently filming the fourth series of CBBC show Danny & Mick, in Northumberland, and will finish just before Cirque Du Hilarious begins.

The show, which sees Danny playing a dogsbody in a leisure centre where his brother, Mick, works as a security guard, will air later this year on CBBC.

Danny said: “I can’t wait to get back in the Laughter Dome big-top and give our loyal North-East fans a fantastic show. There’ll be flying boomerangs, the world’s best circus acts, a big bang and of course – me as the human cannonball! There is something for everyone, so bring the family down for a fantastic day of fun.”

For more information and to book tickets visit www.cirqueduhilarious.co.uk.