Posted on June 1st 2016 by Whats on Northeast 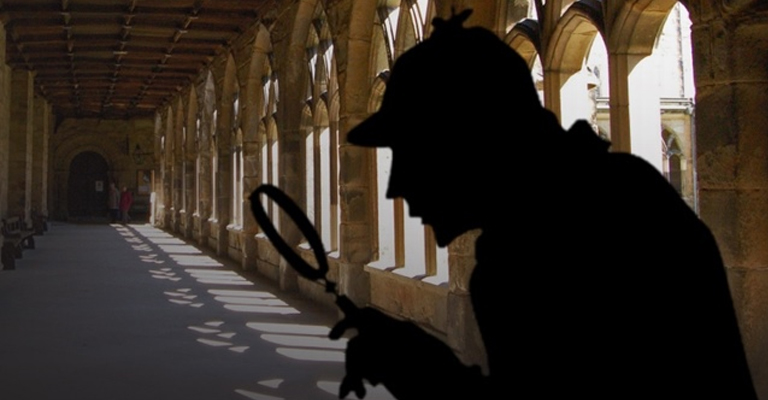 On a clear spring evening, deep in the crypts of Durham Cathedral, the aftermath of a horrific act of multiple murder unfolded in front of us.

Fear not, this was not some terrible real-life tragedy or a gruesome happening from history, but a work of fiction – a murder mystery evening based on the popular board game Cluedo, set in the Undercroft Restaurant.

Greeted with a glass of Pimms on arrival, we mingled with the forty or so other guests in the Undercroft foyer, ready to channel our inner Sherlock Holmes. It didn’t take long to notice some suspicious looking characters lurking among us however… Firstly a well-to-do chap turned out in tweed introduced himself as Colonel Helman Mayo and welcomed us to his stately home between puffs on his pipe, then Miss Magenta made our acquaintance, followed by Professor Plumber, and finally Lady Weewilly. As they each introduced themselves their various Stand eccentricities immediately got the cogs turning… Why was Professor Plumber wearing gloves on such a fair evening? Why did his Italian accent seem a little unconvincing? And why was Lady Weewilly looking so worse for wear this early on in the night?

As we took our seats in the Undercroft Restaurant, it became even more apparent that this wasn’t going to be a standard Friday evening out at a restaurant. Along with wholesale mlb jerseys the wine list, spread across the table were newspaper reports, room layouts and book extracts, all serving as evidence to fuel our upcoming investigation.

Games master Rolland Ice then proceeded to set the scene – we were all gathered có for the 10th anniversary of the unsolved murder of Doctor Dim with the original suspects. It was to be a chance for them to get their heads together and try to in figure out once and for all who was guilty of the murder a decade ago. But events quickly took a sinister turn when a rigged game of Cluedunnit aroused suspicions that trouble was afoot, and sure enough Greenery and Beige were discovered dead. We were told one person in the room was guilty of their murder, and so set out trying to piece together the evidence to figure out whodunnit. And so, with the help of a bottle of Durham Cloister Ale and my team, I went to work.

The three courses of food that separated the murder mystery were excellent – I opted for the duck and port pate education, to start, followed by a supremely tasty supreme of chicken, rounded off with a white chocolate and raspberry cheesecake. After dessert each team was given a minute to interrogate each suspect, in a last chance to firm Pig’s up their suspicions into a guilty verdict. But that only served to cast further doubts on our favoured line of enquiry, as their playing of the blame game made it difficult to deduce the truth. Was it Colonel Helman Mayo in the Library with the Knife…? Lady wholesale nba jerseys Weewilly in the Ballroom with the Pistol…? Miss Magenta in the Kitchen with the Arsenic…?

The plot had thickened with every course, until the mystery finally unravelled…

That only three of the cheap mlb jerseys eight teams deduced (or Misty guessed) correctly whodunnit is testament to the talent of the Highly Suspect team in luring you off-track with their polished, quick witted performances. They were more than comfortable with improvisation and brought a fittingly macabre sense of humour to the evening. Admittedly our team got both the guilty verdict and motive wrong (plus our team name and the limerick we wrote for judging were equally suspect!) but we had a fantastic evening nonetheless. I very much look forward to similar events at the Cathedral in the future.

Speaking of which, The Undercroft Restaurant is hosting a fine dining evening (sans murder if that’s more to your tastes!) on Friday 7 October.