Posted on February 15th 2018 by Whats on Northeast 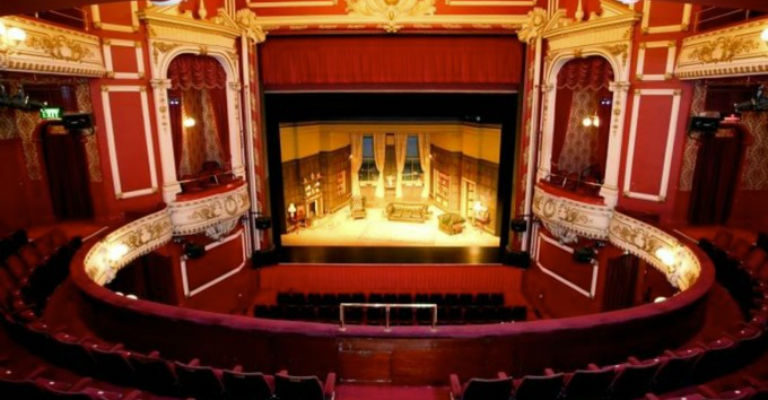 A thoroughly modern and unique take on a history tour

The newly refurbished Darlington Hippodrome, formerly the Civic and before that the grandly titled The New Hippodrome and Palace Theatre of Varieties has such a rich history that it was begging for someone to take it all and make something of it.  Other historic recountings have invested in video or multimedia sessions with the audience sat in a plush new lounge and furnished with an audio guide but that’s not the New Hippodrome’s style.  For this, the brilliant ODDMANOUT have been engaged to work with the Hippodrome and the Hippodrome Theatre Company and have produced an innovative, interactive, entertaining and downright fun approach to both guided tour and history lesson.

Starting with a flashmob-esque opening number which I guarantee will leave you with the evening’s earworm, you are brought together in a small group and taken on a behind the scenes and screens tour of the new and old, while along the way being entertained by characters from literary and theatrical stardom.

The ‘cast’ – who seems to morph seamlessly between characters, guides and even audience are brilliant in making the history come alive.  Stories from giants such as Carrol & Shakespeare are rammed hard up against the comedic shoulders of Barry & Paul, driven to ‘fight’ by Lewis and then cuddled by the quintessential British Dame, all done as you wind your way through the auditorium, changing rooms, stores and flys.  Not only do you get to tread the boards and gaze out at the seats, but you get to spend time in the Green room, intruding on a rehearsal which would fit perfectly with The Play that Goes….

If you have ever been to the Hippodrome (or Civic), if you enjoy theatre in general but wonder what ‘behind’ is like or if you just love great entertainment and watching a very, very good cast please, PLEASE treat yourself  and grab a ticket – it’s only on for an hour but it’s so much fun and you may just learn a little. If nothing else you will appreciate why you should take heed that There’s a Fish Train Comin’.