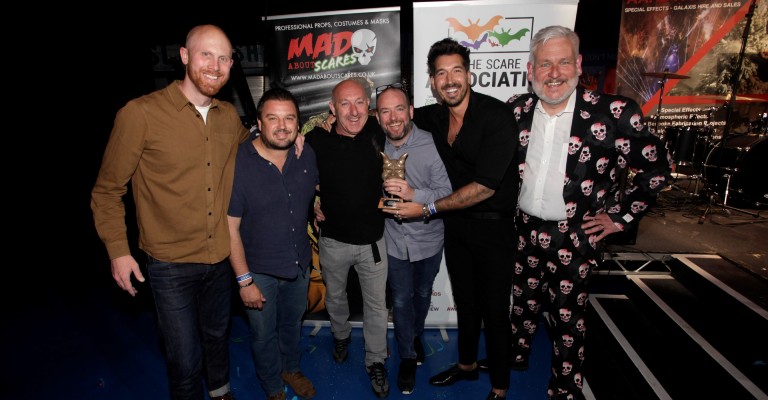 Psycho Path – which runs each October at Lintz Hall Farm, Burnopfield – last night (11 May) was named Rising Star of the Year at the ScareTOUR annual awards.

And the win highlights the continued success of the fast-growing attraction, which offers a range of terrifying thrills along with live entertainment, fairground attractions and a large scale food and drink offering.

The ScareTOUR awards are widely recognised as the most respected in the fast-growing scare attraction industry and were organised as part of the Scarecon convention which has taken place this week at Thorpe Park in Surrey.

More than 400 people attended the ceremony and organiser Michael Bolton, who has been running the event for more than 15 years and runs the ScareTour review site, said that Psycho Path was a worthy winner.

“Psycho Path may be relatively young compared to some of the other scare events but it already feels like something really well established,” he said.

“It’s a really well rounded event which has so much to offer alongside the scare attraction.

“You can also see the passion of everyone who is involved and they were up against some stiff competition but Psycho Path really stood out and you can see it’s just going to keep on growing and getting better and better.”

The Psycho Path team are overwhelmed to have received the award, which gives them an official stamp of approval that they are hitting the right note.

“We’ve always been incredibly passionate about Psycho Path and about delivering something really special,” said Christiano Crawford, one of the directors and creators of Psycho Path.

“To have that recognised by the scare community and our peers is a real honour and something we are very proud of.

“We’re already building something very special for 2022 and this award gives us huge faith that we are going in the right direction and that we can keep building on our success year on year.”

Psycho Path 2022 opens on 30 September and then will run every Friday and Saturday night from 7 October and from 28 to 31 October.

Tickets are now on sale at www.psycho-path.co.uk