PARADE BRINGS THE SPIRIT OF CARNIVAL TO SOUTH TYNESIDE…

Posted on April 28th 2022 by Whats on Northeast 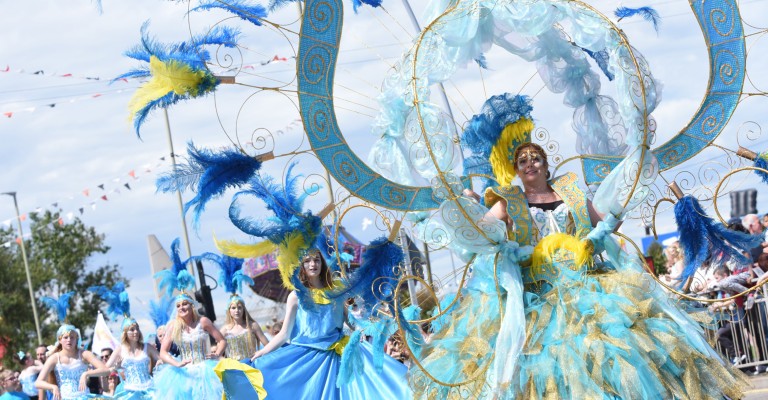 And visitors at this year’s free event can expect neon colours, vibrant floats – and even good use of empty crisp packets and milk cartons.

Carnival experts, Creative Seed, who put the parade together on behalf of South Tyneside Council, have revealed that this year for the first time there will be recycled section, making good use of items that are usually thrown away.

“We’ve been collecting all kind of empty packets to use and the results are going to be spectacular,” said Garner Harris of Creative Seed.

Around 20 groups have already signed up to be part of the ever-popular parade, which was cancelled during the pandemic.

“It’s fantastic to be back and we are going to make up for lost time with some absolutely amazing costumes and displays,” said Garner.

“Big, bold and colourful is what we’re working to and we hope this is going to be the most memorable parade ever.”

The parade which starts at South Shields Town Hall will make its way along a new route via Beach Road and Anderson Street, before continuing along Ocean Road and Sea Road to Bents Park, where there will be a full programme of family-friendly entertainment for the remainder of the afternoon.

The parade programme is also being expanded this year to help create a carnival weekend with artists, including stunning street theatre and an impressive circus show, performing on the Sandhaven promenade on the Sunday (3 July).

The Summer Parade and street theatre is being organised by South Tyneside Council and supported by Arts Council England.

It is part of a packed programme of events throughout the summer which includes the free Sunday concerts featuring headliners such was Will Young and Ella Henderson.

Other events include Proms in the Park, a range of musical entertainment at the Amphitheatre and a Kids Fun Fest.

Councillor Pat Hay, Mayor of South Tyneside, is delighted the parade has returned.

“The parade is such an important part of the South Tyneside Festival and brings so many members of the community together in what is always a joyous celebration,” she said.

“This year looks as if it’s going to be particularly colourful and we can’t wait to see this amazing spectacle.”

Any groups wanting to take part in the parade should contact the Council’s events team at South Tyneside Council on 0191 424 7986 or email events@southtyneside.gov.uk