Posted on September 17th 2018 by Whats on Northeast 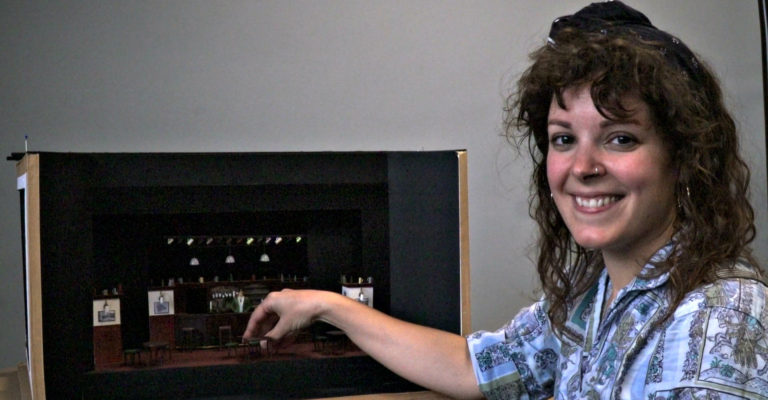 Traditional northern pubs have inspired the set of an upcoming play packed full of humour, humanity and heartbreak.

TWO, by Jim Cartwright, is the latest show to be produced by the Gala Theatre and opens at the Durham arts venue next month.

Over the course of one evening, audiences will get to know the regulars of a 1980s pub, sharing their highs and lows, and all of the laughter and tears along the way.

And, this week, set and costume designer Hannah Sibai unveiled her vision for the all-important pub setting to members of the cast and crew. This included director Tom Wright and North-East actors Jess Johnson and Christopher Price who will bring all 14 characters to life.

Hannah visited pubs and workingmen’s clubs across the region to seek inspiration for the set and the result is a pub interior which could easily be found in any northern town or village.

She also drew on her own childhood memories to add nostalgic touches to the decor, while the inclusion of maps and pictures of County Durham adds to the sense of place.

Hannah said: “I wanted to create a set that feels instantly familiar to people, the kind of pub we have all been to either as a regular or to attend a party or family function.

“TWO was written in 1989 and we have kept it in that era, which is really exciting from a costume and props perspective. I’m sure it will evoke nostalgia among many audience members but if you weren’t around in the 1980s, don’t worry, the characters and their stories are just as relevant today.”

Tom, who has been a fan of Jim Cartwright since watching his first play, Road, as a teenager, said: “Jim writes in such a touching way, turning working class voices into poetry

“The characters in TWO are not two-dimensional northern stereotypes, they have depth and the audience can identify with them and the issues they face.”

TWO runs at the Gala Theatre from Tuesday, 2 October to Saturday, 6 October at 7.30pm, plus additional performances at 2.30pm on Thursday and Saturday.

Tickets cost £15, £13 for concessions and £12 for Gala members when attending the first night and matinee performances.