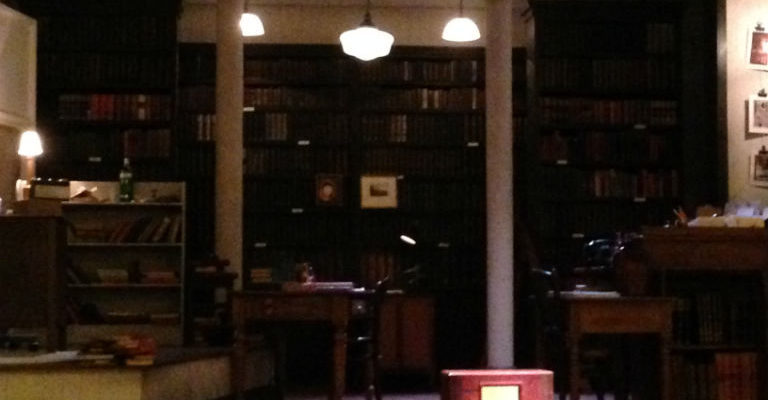 84 Charing Cross Road is a charming and utterly beguiling story of love – love of books, of travel, of finding a kindred spirit and of sharing the most human of qualities, that of time.  Adapted by James Roose-Evans and directed by Richard Beecham, this Cambridge Arts Theatre Production started its tour at Darlington Hippodrome – a tour which will undoubtedly and very deservedly receive huge applause and accolades wherever it plays.

Beginning in 1949 and spread over 20 years, it charts the long distance friendship between Helene Hanff (Stefanie Powers), a Brooklyn writer and bibliophile, and Frank Doel (Clive Francis) the chief buyer for Marks and Co, a second hand book shop in London.  Between them they share the trials and joys of post war rationing, the death of King George and coronation of Queen Elizabeth, the blossoming of TV, the rise and fall of the Brooklyn Dodgers and the cultural shift of pop music, all played out against the backdrop of Hanff’s constant searching for rare books.

Told through a series of correspondences, 84 Charing Cross Road (which is the address of the bookstore) is a wonderful and genuine tale which cannot fail to touch the heart of everyone who sees it.  Powers’s performance is simply one of the best you’re likely to see anywhere on any stage – her American forwardness boarders on brash without ever being crass and underneath, her gentle ribbing of the rather straight-laced Frank Doel belies a growing love for him and all things English.  In return, Francis portrays Doel as the consummate early 20th Century Englishman – proper, polite and purposeful and yet, over time he too grows to love his American ‘cousin’, relaxing his formality and replacing it with warmth and affection.

The set, designed by Norman Coates is a perfect example of the craft at its very best – split between Hanff’s Brooklyn Brownstone apartment and the London bookstore, you can’t help but feel you’re stepping between two different worlds, and with clever use of highlights, the attention of the audience is gently shifted between the two leads as they take turns to write and read their correspondences.

Cleverly aided by live music, the bookshop staff all play their part in creating a happy workplace vibe as we are taken by the hand through the seasons and milestones – Christmases (for which Hanff sends the store food parcel gifts with such delicacies as eggs and ham), Easter, New Years are all shared with the audience – as are the end of rationing, staff leaving to start families, sad demises and happy coronations.

What sets this story apart from so many others is Hanffs searching for, and Doel’s locating of the rare books – names such as John Donne, Samuel Pepys, Chaucer, Jane Austin, Izaak Walton and Virginia Woolf evoke such passions and desires for holding their physical works which, in the current day are all too often substituted for electronic versions on a tablet.  What is even more impressive, is that this story is true – Helene Hanff did request all these books (and many more not listed in the story) and was genuinely in love with holding the physical copy.  Likewise, Frank Doel saw in a ‘well bound and clean’ book a piece of art to be enjoyed as much by looking at it as it was to be read.

If you plan to see only one play this year, make 84 Charing Cross Road your priority, if you fancy seeing more than one then go and see it again.