Posted on November 26th 2019 by Whats on Northeast 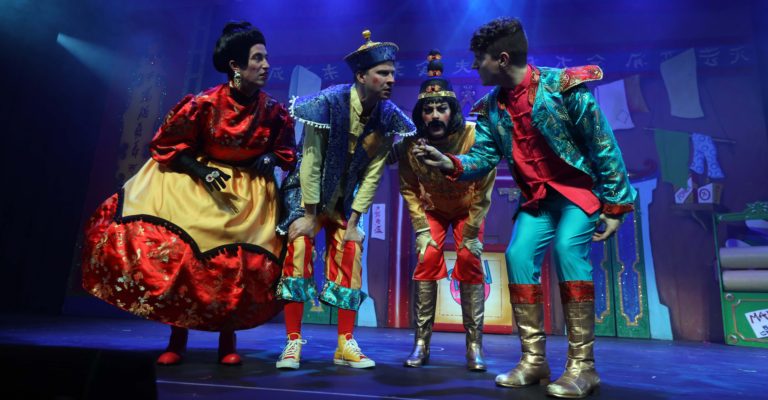 With its usual local jokes and lots of razzmatazz, gags and eco-friendly ticker-tape, this year’s Gala panto was a great way to start the festive season. A panto staple and much loved story, Aladdin, written and directed by Gala duo Paul Hartley (Wishy Washee) and Neil Armstrong (Abanazar), transported the audience to Egypt where Abanazar and his four mummies were searching for the mystical magic lamp. Upon hearing that they needed a boy named Aladdin to rescue the said lamp from a deadly cave, we were quickly transported to Peking and were soon enjoying the hilarity brought on by Paul Dunn (Widow Twanky), who I have to say is probably my favourite actor from the Gala panto’s.

When I saw that this year’s panto was Aladdin, I was transported back about 4/5 years ago to when I first saw this story at the Gala and hoped that it wouldn’t be the same show. However we weren’t disappointed as the script and gags had all been refreshed which was great to see. There were a few new faces in the cast too; David Hosie as Aladdin, Eleanor Chaganis as Princess Jasmine and Kylie Ann Ford as Chief Inspector Tai Chi, which brought a sense of freshness to it as well. There were new costumes, new songs and new dances and even an mariachi band (yes, a Mexican band in Peking!). Wishy Washee’s slapstick comedy is second to none and it’s easy to see why he (Paul Hartley) is a firm favourite on the Gala panto scene. Not to give too much away but watch out for the bloomers, the camel poop and the quicksand. You’ll be in stitches!

There was plenty of audience interaction, with the whole cast just about running crazily through the stalls in a mad chase at one point, which gave all the little ones watching a little something extra to get involved with. Although, it’s not just about the kids. There were plenty of tongue in cheek/double entendre  gags that had the adults in stitches too. Over all, the friendly, relaxed and funny atmosphere of the annual Gala panto is a firm favourite for us and our Christmas season just wouldn’t be the same without kicking it all off with this show. So hop onto the magic carpet (which does actually fly through the auditorium!) and enjoy the hilarity as Abanazar’s quest for riches and Aladdin’s romance blooms in this year’s fantastic show. Aladdin runs from 21 November 2019 – 5 January 2020. Tickets are available from £7 – £18 (£54 – £62 for a family ticket).