Posted on December 12th 2019 by Whats on Northeast 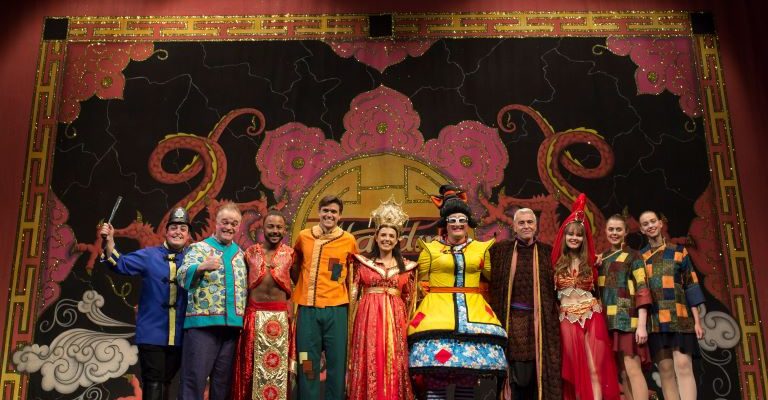 On Friday, we attended the launch night performance of Enchanted Entertainment’s pantomime production, Aladdin, at the Tyne Theatre & Opera House in Newcastle and what an opening show it was. Aside from the panto, the venue itself is pretty impressive and it simply added to the whole ambiance of the night.

There’s no subtle story telling for this beloved panto tale. No, this show has it all. Fire, sequins, laughs, aerial stunts, actual flying carpets and even foamy fun to name just a few things that my family loved about this show and we haven’t even mentioned the characters yet.

The mix of local and household names was a pretty genie-ous idea, including  X Factor runner-up Marcus Collins as the ‘Genie’, soap stars Home and Away’s Nic Westaway as the lovable ‘Aladdin’ and Hollyoaks’ David Easter, as villainous ‘Abanazar’, as well as Wrekenton’s local lass Hannah Wales as Princess Jasmine.

The musical numbers were great, with a mix of old and new tunes to keep the crowd moving in their seats and Marcus’ confident vocals bringing it all together flawlessly. Clearly swapping the sunny shores of Summer Bay for a few weeks on the Tyne works well for Australian Nic, who brought the cheeky and cute factor to the beloved character Prince Ali. Hannah’s rendition of Jasmine was sweet and very Disneyesque and the pair worked well together on stage, especially when the pair sang the Home and Away theme song on the wall. However, the standout man of the show for me had to be hilarious panto comic Charlie Richmond who played Aladdin’s silly brother ‘Wishee Washee’. Charlie was simply a hoot and he had the kids (and most adults) eating out the palm of his mischievous hand with his plethora of local references and jibes about rival towns. Even at the end of the show when the silly character does their wrapping up and thanks, he invited a handful of children up and really made them feel comfortable on stage.

Smooth operator David played the dastardly devil Abanazar perfectly, jeering at the crowd at every opportunity but brining out the big guns (and sunglasses) for his, quite frankly, excellent take on Elvis Presley song Trouble. North East singer and comedian Lewis Denny’s PC Pong was a fun mix of chaos and comedy capers that had the kids chuckling every time he was on stage.

Also, I can’t pass up the opportunity to give a shout out to the very talented dance duo Emma Dearden and Rachael Alexander who stunned the crowd with their pro dance routines, fire artistry and aerial displays; what a talented pair they are.

In summary, between the Disco dance numbers, the silly antics, pyrotechnics and buckets full of foam and panto magic, Aladdin was a great night out filled with festive family fun. You certainly won’t be disappointed with this beloved tale. Enchanted Entertainment are bringing 53 spellbinding performances of Aladdin to the Tyne Theatre and Opera House from 6th December 2019 – 5th January 2020 and ticket prices vary.