Posted on April 9th 2019 by Whats on Northeast 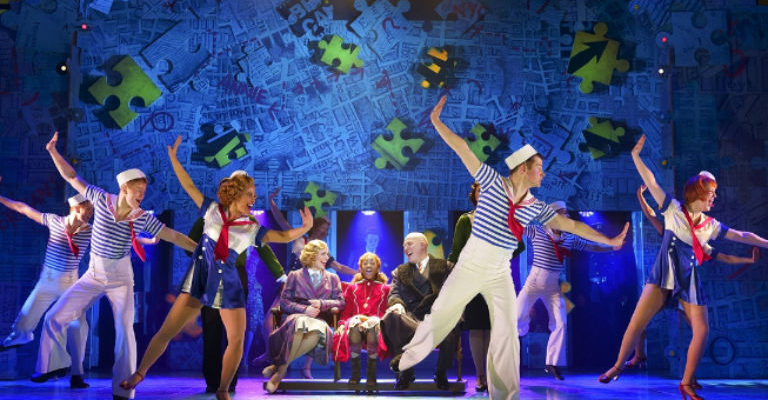 I was so excited to see Annie the Musical at Newcastle Theatre Royal last night and so I should have been, it was absolutely amazing. A lover of the film, I was interested to see how the story could be reenacted into a theatre performance, but I can confidently say that the team behind Annie the Musical did a fantastic job in doing so.

Annie the musical is based on a fun storyline, full of singing and dancing but also manages to pull on the heart strings of the audience as well. This theatre version was more like the original film of Annie, rather than the more modern one, which was what I was hoping for. Set in New York in the 30’s, life is hard especially for the little girls in the orphanage who are forced to clean and, if they are lucky, eat hot mush for dinner, otherwise its cold mush. Oh, and having fun is forbidden by Miss Hannigan, played by the wonderful, confident and award winning actress Anita Dobson who many of you may know from television’s EastEnders (it truly was a pleasure watching Anita Dobson play live). Annie is determined to find her mother and father so she takes things into her own hands as she escapes the orphanage in the hope to track down her parents, where on her travels she find the cutest pup named Sandy. Now it’s rare to see a dog on the stage but this particular Labradoodle was the best behaved and adorable pup going. The whole audience was in awe.

Later in the story, Annie finds herself with the chance of staying with billionaire Mr Warbucks, played by the talented Alex Bourne, for 2 weeks, but only on the strict rules that Annie is a lucky guest, no cleaning is permitted. After staying with the billionaire, it is beautiful to see how their friendship grows and Mr Warbucks becomes very fond of Annie as though she was his own. But it’s not that easy, Annie is still determined to find her parents. This part in the story will have you on the edge of your seat, trust me….

Throughout the whole performance, Annie is represented as a fun and influential character, so much so that with her singing she inspired the President, Mr. Franklin Roosevelt to take on a new approach – optimism! In fact, for all the cast, their character’s personalities shine through so well, and this is what makes the performance so fun to watch. Oh, and of course the singing was fantastic too!  From songs such as ‘Hard Knock Life’ where the little girls were dancing along to ‘East Street’ it really was a musical like no other. It was fun, energetic and just exciting to watch! My favorite song however was ‘You’re never fully dressed without a smile’, it was one of those songs that make you want to do that little move side to side dance in your seat and it was lovely to see the little girls singing along to this song on the radio as well.

I can confidently say that I walked out the Theatre wanting to watch the performance all over again, it was probably one of my favorite shows that I have seen. The whole production was set out perfectly, I particularly liked the end when the whole of the cast stood together after celebrating, the different colored lights shone through and the confetti fell on them all. I though this part especially look beautiful, but I did not want the performance to end even so. It truly was a fantastic show, I would love to see it again.

Annie will be playing at the amazing Newcastle Theatre Royal until Saturday 13th April. This is show not to be missed! You can purchase your tickets from https://www.theatreroyal.co.uk/whats-on/annie.

I would like to say a massive thank you to the polite and friendly team at Newcastle Theatre Royal as well, p.s. the popcorn was delicious!