Posted on March 9th 2018 by Whats on Northeast 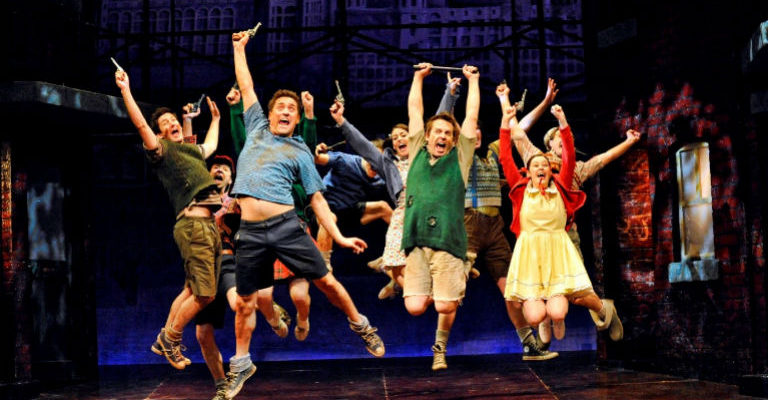 Evergreen favourite Blood Brothers makes full use of the newly refurbished Hippodrome, bringing everyone to their feet for a rapturous and well deserved ovation and sets a new high standard for musical theatre.

I doubt there’s many in the land who have not at least heard of Willy Russell’s timeless classic tear jerker Blood Brothers, every tour draws record crowds of seasoned viewers and first timers, and, with each cast, the style and subtleties shift back and forth, but this current tour and the newly remastered soundtrack brings the whole show into the HD age.  Stunning sets, an immersive soundscape and innovative lighting breathe new life into an always vibrant show furthered enhanced by some brilliant additions and updating to the script and playlist.

Making full use of the Hippodrome’s enlarged stage and increased scenery capacity, the cast have space to grow and develop their characters in ways previous versions were restricted.  The new sets provide a solid feel to the streets of 70’s Liverpool and real air of believability, you can almost taste the smoke filled air and smell the grime.

The story is one of faith and fate – the Johnstone twins, separated soon after birth, one destined for a life of privilege and the other a life of struggle and toil, are oblivious to their fraternal links and yet despite (or because) of this, fate draws them together to for a childhood bond – Blood Brothers.  Sadly, as their youth being to slip away, the demand of each’s callings start to strain their once happy partnership resulting in the most horrific and heart-breaking climax to any story.  Overseen by the Narrator (if not THE Devil then certainly A devil) played with an omnipresent maleficence by the brilliant Mathew Craig, who manages to both snarl and smile in equal measures and always with a degree of absolute menace.  The main focus for the 1st act is the relationship between the hard worn, yet happy mother of many Mrs Johnstone, and the lonely Mrs Lyons, for whom her considerable wealth cannot buy the one thing she craves most, a child.  Playing Mrs J for tonight’s show was the utterly mesmerising Sarah Jane Buckley.  Sarah Jane, who for this tour is normally in the shoes of Mrs Lyons, plays by far the very best Mrs Johnstone I’ve ever seen – her early innocence (despite the hardships of being a single mother of 5) is always upbeat and optimistic and even when it became more world weary, she resists the temptation to introduce any cynicism into her character and instead just exudes maternal love for her whole brood.  As with anyone playing this role, she will be ultimately judged on the final number, performing the stand out classic “Tell me it’s not True” and it is here, at our journey’s end that she displays the raw emotion only normally seen at the site of real life tragedies.  What sets this performance apart from others gone before is that Sarah Jane doesn’t rely on simply building to a huge crescendo, she wrestles with trying to control her grief throughout, acting in true disbelief and even making to tuck her two little boys in as though they were just having a nap before the reality breaks and with it every eye in the theatre starts to water.

Of course, the story wouldn’t be anything without the twins – Eddie, the one handed to privilege whose childlike innocence and ability to stay aloof from the demands of forging his own way in life is played by Mark Hutchinson.  It is telling that Eddie, despite aging at the same rate and duration as his twin, seldom loses, or has to lose, this immaturity, being of wealth and the protection that brings.  Micky (Sean Jones) on the other hand, takes the viewer on his rollercoaster journey of a childhood of total abandon, through the awkwardness of adolescence and then into the downward spiral of disillusionment, depression and eventually destruction.  Sean has a remarkable ability to capture each stage so perfectly that were he to only depict one version of Micky it would be heralded as a masterpiece, yet here we are being treated to multiples.  His final portrayal of Micky, dependent on tranquilizers and doubting of his own sanity was so good it left me unable to shake a concern for his real well being.

The rest of the cast provide this new version with a much more rounded and substantial.  Aside from the street kids in the early story, they seamlessly morph into teachers (both private and state) bus drivers, policemen, bailiffs and delivery men – perhaps the funniest was the instance of the milkman suddenly becoming a gynaecologist – both responsible for deliveries.

The dynamic lighting and rescored soundscape thrust this production firmly into the HD era; perhaps this is needed more now than ever as the competition for audience means musical theatre is going head to head with digital providers such as Netflix, as well as the mega box office franchises a la Marvel Universe etc.  What is clear from watching last night, is that regardless of the Hollywood millions, there is no substitution for feeling the emotion of a live performance when it is delivered by truly amazing actors, a feeling that becomes almost tribal when you look around and see everyone else experiencing the very same feelings as you.