Posted on May 7th 2018 by Whats on Northeast 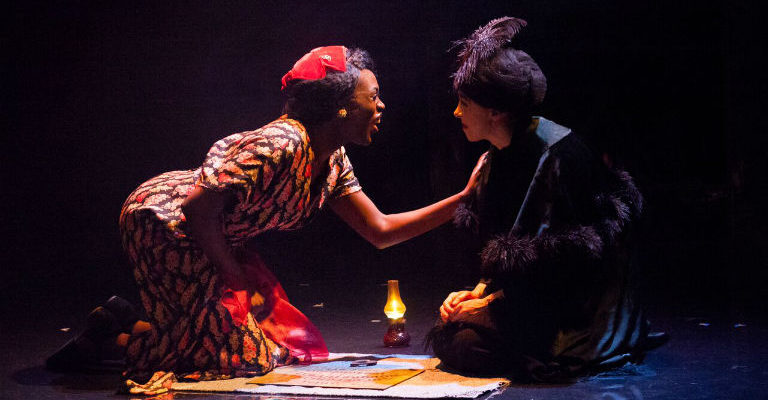 Following on from Playwright Bryony Lavery’s much acclaimed and award nominated Frozen, her adaptation of Graham Greene’s Brighton Rock is a darkly delicious descent into the anguish and turmoil of a young man trying to understand who he is and what is his place in life.  Whilst Greene wrote this story in 1938, the themes and characters are instantly recognisable today, thanks in the main to the brilliant directing of Pilot Theatre’s Esther Richardson, who uses both traditional and contemporary techniques to present the multiple personas constantly in bitter struggles with themselves.

The story focuses on Pinkie, a 17 year old wannabe gang leader who craves respect far greater than his tender age deserves meaning when he doesn’t get it he inevitably turns to violence.  Brilliantly played by Jacob James Beswick, Pinkie is constantly on the edge, the edge of reason, the edge of glory, the edge of sanity – Beswick’s energy is truly scary, never quite knowing whether he is about to smile or scream.  The rest of Pinkies gang are forever tiptoeing round on eggshells, fearful for saying the wrong word, looking the wrong way, and yet magnetised by his charisma and forthright ambition.  Sitting in the 2nd row I felt myself shrink whenever Pinkie took on a rant and yet, like his gang, felt attached to him with an illogical loyalty.

On Pinkie’s orders, the gang murder a rival who was masquerading as a newspaper celebratory but find they have left a witness who can link them to the killing, a young waitress, Rose, and so Pinkie must decide whether to kill her too or befriend, and ultimately try and control her.  Rose, played with a heart-breaking mix of wide eyed innocence and adolescent passion by Sarah Middleton, falls for Pinkie, despite (or perhaps because of) his manic obsessions, and agrees to not only keep quiet, but to help him avoid further detection.  Sarah is a wonderful actor and in Rose, she is able to take the audience on an accelerated journey to becoming a woman, yet never loses the childish binary belief of right and wrong.  This is further reinforced as both Pinkie and Rose are from devout Catholic families, brought up on the premise of Heaven and Hell, of mortal sin and of repent and atonement.  When Greene wrote his original story, there were only two dominant paths of fate but you can substitute Catholicism for any religion, faith or belief system making this story as true and relevant to today’s youth as it was for those in the 30’s.

Following all this action is Ida Arnold, a seeker of truth and justice with more than a passing resemblance (in investigative prowess at least) to sleuths of Agatha Christie.  Ida, played by Gloria Onitiri, pieces together the fragmented detritus left in Pinkie’s wake and begins to see that the police have either missed, or chosen to ignore, vital clues linking several suspicious deaths all back to Pinkie.  When Ida realises that Rose is being drawn into this underworld she vows to protect her, even if it means taking on Pinkie and his gang herself.  Gloria gives Ida some real spunk; at first she seems like a bit of a lush, hanging round the bars, betting at the races, but all too soon displays a steely resolve to go toe to toe with the gangs.

The choreography and scene setting is elaborately simple – movement around the stage is poetic, even the set shifting is done with an artistic flourish meaning the audience never drops its gaze.  The soundscape, an ever present live accompaniment composed by Hannah Peel is possibly the best I’ve ever heard – it is reminiscent of David Lynch’s underscoring of scenes in the TV series Twin Peaks – rhythmic heartbeats, low and metronomic are almost imperceptible until the action at which point they help drive the audience into the heart of Pinkies psychosis before subtly fading back.