REVIEW: Crazy for You @ Sunderland Empire

Posted on April 26th 2018 by Whats on Northeast 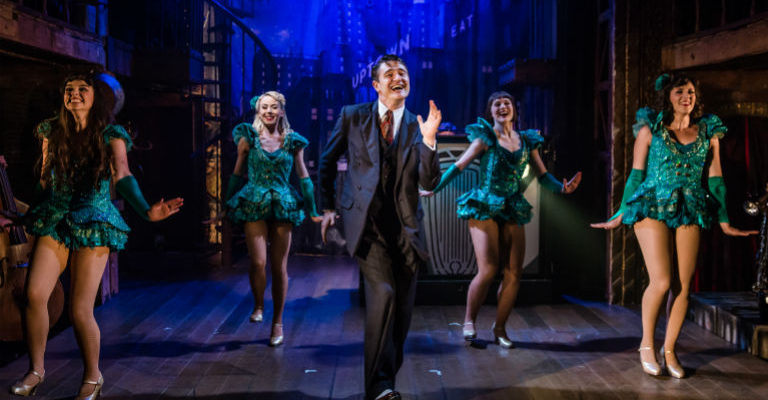 A musical romp which harks back to the 1930’s and perfectly encapsulates the musical magic of Ira & George Gershwin, Crazy for You is an award winning tale, revisited for a new UK tour and guaranteed to present the audience with a wonderful evening of song, dance and comedy.

Based on the brothers’ Girl Crazy, the story tells the tale of a down at heel theatre in Nevada about to be repossessed by the New York bank who hold the title deeds, only to find an unlikely saviour in the guise of the bank owners star & love struck son.  Following stereotypical portrayals of midwestern cowboys (hard working, hard drinking and somewhat simple), New York socialites (snooty, snobby and elitist) and theatre producers (extravagant and egotistical ‘luvvies’), the main players find their lives intertwined through fate, deceit and ultimately love.

The lead is played by Tom Chambers, no stranger to following the twinkle toes and dulcet tones of Fred Astaire – Chambers has starred in the stage version of Top Hat, recreated a solo dance routine from Damsel in Distress,  as well as amazing BBC viewers by winning Strictly Come Dancing.  He is perfectly suited to playing Bobby, the wealthy banker who pines to be on the stage. Equally adept at slapstick comedy as he is at performing complex tap routines, he drives the whole show along at such a pace that your head spins trying to keep up with all the interplay.  His portrayal of drunk Bobby pretending to be producer Bela Zangler while the real drunk Zangler mirrors his actions is physical comedy at its timeless best.

Playing opposite him as the daughter of the Deadrock, Nevada theatre owner Polly is the simply brilliant Charlotte Wakefield – Charlotte is an all singing, all dancing Calamity Jane but with more moves and less guns.  She gives a wonderful performance, equally vulnerable as she is headstrong without ever dropping into a pastiche of the cliched Wild West Tom Boy.

Adding more sex appeal than should really be allowed on a school night, Claire Sweeny oozes and  schmoozes as Irene, Bobby’s New York betrothed – perhaps the only fault of the whole show is that we see too little of Claire in the 1st act, but her recreation of Michelle Pfeiffer’s famous piano scene in Fabulous Baker Boys (complete with a stunning red dress) more than made up for it.

Produced by the Watermill Theatre Company and directed by Paul Hart, this tour protects the integrity and legacy of the original production and ensures that, for all the razzamatazz and dancing, it is the Gershwin music that stays centre stage.  Timeless hits such as Embraceable You, I Got Rhythm, Someone to Watch Over Me, Naughty Baby, Nice Work and They Can’t Take that Away from Me mean everyone will recognise some of the tunes, whilst possibly being introduced to some of the brothers’ lesser known tunes.

Crazy For You is a brilliantly funny and entertaining show and one which is guaranteed to give a great evening.