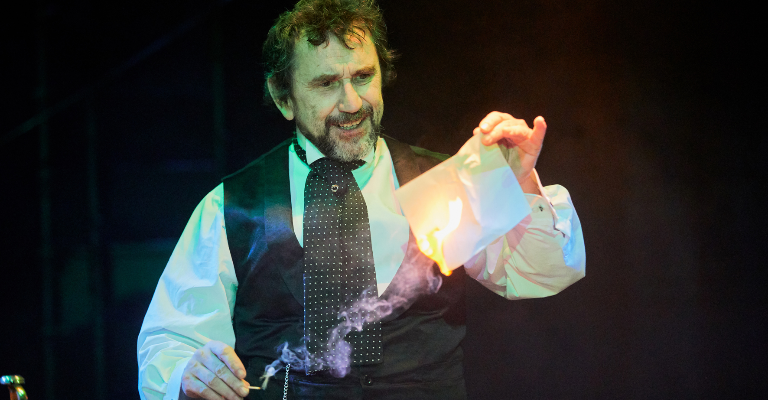 Robert Louis Stevenson’s gothic novella has been the subject of a multitude of films, radio plays, and tv series, so this current TCTC/Rose Theatre production, adapted by David Edgar and directed by Kate Saxon has some tough competition to follow – but it is clear from the very beginning that this show follows no one, it leads. The story is built on the mystery that surrounds men of profession, the suspicion that people of money are free to dabble with any pursuit, safe from the prying eyes of the populous and surrounded in the protective company of people of influence.

Remaining true to the period and setting, the opening scene plunges the audience into the dark and gloomy world of smoggy London Town with the class divide ever present – a dirty match girl trying to eek out a living on ha’pennies from the suited and booted gentry.   We are introduced to Dr Jekyll, a broad, if somewhat refined Glaswegian (Phil Daniels demonstrating that despite being considered the UKs best cockney, he has a huge range of accents he can draw on), his widowed sister and her family.  Dr Jekyll is searching for his late fathers scientific writing, and, whilst not explicitly revealed, the source of his forthcoming experiments.

Quick shift to Jekyll’s London town house and laboratory and we begin to understand that there is a fine line between genius and madness, one which the intelligencia of the day are constantly trying to cross using whatever means and substance possible.  There are some quite lengthy discussions around the binary of the human psyche, challenging the audience to choose between faith and science, but given that the lead is a doctor, we already know the path to be taken.

Jekyll ‘successfully’ recreates his father’s experiment, initially conducting the tests with a scientific approach under exacting conditions but all too quickly he descends into affliction, addiction and despair.  As with all good tales of the time, there is no happy ending (this is pre-Hollywood, who always seem to be focussed on sending the audience home happy) – the beast unleashed is too much for Jekyll to consider and so he takes the only path left in his control.

Specific mention goes to Rosie Abraham playing Lucy the chamber girl and target of Hyde’s unwarranted and unwanted attentions – she is childlike without being childish, innocent whilst still of the streets and in the end portrays a love for Jekyll borne from an understanding of the turmoil he created.

Previous incarnations of the tale have used special effects, or even different actors, to portray the split persona of Mr Hyde, here it is Daniels who draws out the alter-ego, changing his stance and movements and broadening his accent so deep that at times it is no more than guttural ramblings.  His temper, loss of rationality and base desires are more caveman than cultured doctor and yet, it is all too familiar for anyone who has seen friends, family or even themselves change after consuming one too many. Indeed, were it not a retelling of RLS classic, this production would make for a very effective, if somewhat shocking, public awareness film on the dangers of drinking to excess.  Polar to that, however, it could also be used as a demonstration of the struggle sufferers of mental health problems face.