Posted on August 13th 2019 by Whats on Northeast 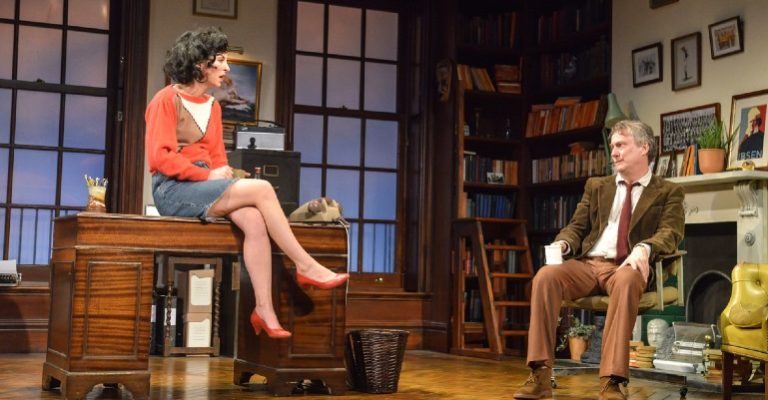 A magnetic performance, as fresh, witty and relevant today as it was 35 years ago.

Educating Rita, written by Willy Russell, is the tale of a working class hairdresser and her desire to break free from her everyday existence by taking an Open University course in English Literature.  Her tutor, Frank, is a long in the tooth, cantankerous alcoholic lecturer whose disdain for the modern approach to learning is only bettered by his hatred for an empty bottle of scotch.   Indeed, Frank only agrees to take on an Open University student in order to pay for his bottles of booze and yet, very quickly he sees in Rita a freshness, an unsullied mind and an unpretentiousness that challenges his jaded and tainted outlook on life.

As a play, this two hander is solely performed from the confines of Frank’s study, designed by Patrick Connellan – set with bookcases, piles and piles of volumes and copious bottles of ‘hidden’ scotch – where the simplest of props, the study door, the waste paper bin, the flower vases are all cleverly used to create a richness to the interaction between student and teacher. Brilliantly directed by Max Roberts, you aren’t so much drawn into this world as sucked headlong and enveloped so deep I could swear you could taste the dust and smell the must.

Playing Frank, Stephen Tompkinson, gives a masterful appreciation of the abject resolution that at some point in life “is this it?” seems to be the most oft used phrase, even if it is in self-denigration.  Challenged by Rita’s unbridled hunger to learn, he portrays both tutor and father figure with equal amounts of paternal care and longing to be young again.  Indeed, Tompkinson brings a lot more of a father figure to the role than merely a university lecturer.  The journey he takes us on is akin to a parent watching their offspring move from wide eyed 13 year old starting out on secondary education (and asking questions on everything) to the know-it-all 18 year old who sees their parent as merely a hindrance.  His frustrations towards the end (and the increased drinking that accompanied them) are not borne from Rita’s changing attitudes so much as Franks inability to accept his work was done.

Rita (or Susan as is her real name) is played by Jessica Johnson, local born, who gives a maestro performance.  Her machine gun delivery and the typical convoluted journeys that people love to take when trying to recount a simple event feel comforting familiar.  Her outwardly brash attitude which belies a delicate and vulnerable core is perfect and her journey through self awareness and realisation is magnetic.  In particular, her frustration with the constraints brought about by assumed societal positions is palpable and very relevant to today’s approach to class and culture.

Fans of the film will not be disappointed by this latest stage production and the standing ovation from the packed first house was testament to the brilliance of the cast, a 5 star performance.