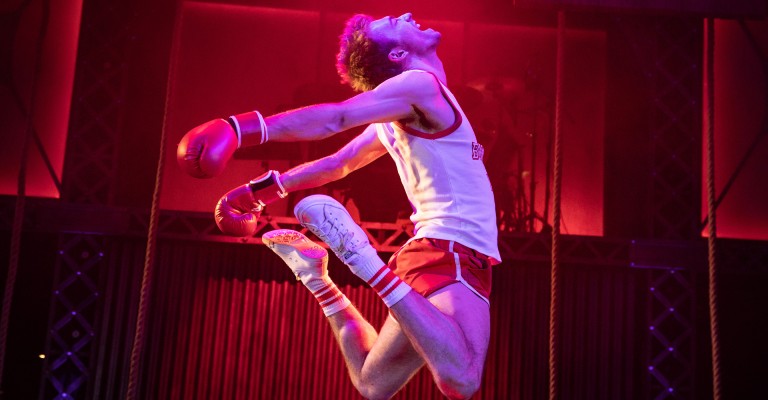 The story of Footloose sees teenager Ren McCormack (Joshua Hawkins) move out of his hometown and into Bomont, where the Reverend Shaw Moore (Darren Day) has imposed a law against dancing. This leads Ren and his new friends to fight for their right to dance. Although similar in some ways to the 1984 smash hit movie, in this performance there were a lot of added scenes and songs and some parts of the story were skimmed over. However, the story was still easy to follow and the collective cast numbers were uplifting and powerful.

Throughout the show there were some amazing individual performances from the cast members. Such as Jake Quickenden as the loveable farm boy Willard Hewitt. He played the character extremely well and really got into the spirit of Willard. Lucy Munden who played Ren’s love interest and Reverend Moore’s daughter Ariel was vocally impeccable and captured the sassy characteristics of the rebel preacher’s daughter.

An impressive feature of the entire cast was that they all could play an instrument, sing, dance and act. Sometimes all at the same time! This feature added a busy feel to the production as actors were rushing on and off stage to pick up their instruments.

The final megamix at the end of the performance included all the 80’s hits that came from the original Footloose soundtrack. The cast made sure people were on their feet, dancing, clapping and singing along which was a great end to the night.

This week Sunderland Empire are collaborating with Footloose in their ‘Let’s Hear It for the Boy’ fundraiser for Men’s Mental Health Week and charity Sunderland Mind. For visitors who would like to donate there are collection buckets for cash and posters to donate online.