Posted on September 5th 2019 by Whats on Northeast 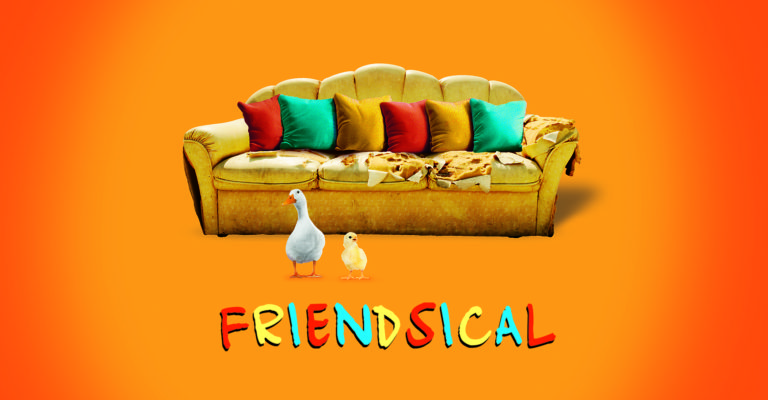 The One with All the Laughing – a 5 star show deserving of a 2 part review.

“The One with the set up”

For 10 seasons, 236 episodes and countless cultural spin offs, Friends, the 90’s show penned by David Crane and Marta Kauffman set the standard and blueprint for modern sitcoms.  Its loveable characters gained such followings that a simple change of hairstyle would send thousands to the salons to insist on a ‘Rachel’.  Since its final airing in May 2004, episodes have garnered a new following, mainly from re-runs on Channel 4 and Netflix.  Those who watched it originally were now sat with their teenage children watching it again, lamenting the more simple times it portrayed and even calling out for a reunion (or movie).

“The One with the Stage Show”

Well, fans need fret no more as Friendsical, the Parody Musical written and directed by Miranda Larson is on tour and guarantees a 5 star laugh-in which demands multiple watches just to get all the clever in jokes.  Miranda has brilliantly written a story of a show within the show, having the ‘real’ Ross Geller put on a musical depicting his life during the 10 years of the show, his ‘On again, off again’ relationship with Rachel Green and the gang of 6 caffeine addicts.  Often having the cast freezing the scene to break the 4th wall and engage the audience, Larson lets the viewers feel they are in on Ross’s plans for his show while the others just wonder “where is Bonnie” ?  The genius of the writing means at times the cast are asking each other why the show doesn’t match the TV, even giving each other spoiler alerts based on what their characters should do later in the run.

Using instantly recognisable tropes and brilliant observations of episodes, characters and oft-asked questions and fan theories, Miranda presents an whistlestop run through the 10 year’s story arcs, mashing up the timelines and injecting comedy music & dance numbers that give the audience little time to catch breath from laughing.  Monica’s Game Night, Ross’s fashion faux pas, Rachel’s hair, Chandler’s dance, Phoebe’s singing and Joey’s …. well, ‘Joeyisms’ are all there in a magnificent homage, ably supported by Gunter’s unrequited love, Janices’ OMG’s and cameos from other friends.  Major events such as Naked Thursday, the power cut, saying the wrong name at a wedding, a gold bikini and getting ready for a dinosaur convention all feature and are destined to delight friends fans across the country.

“The One where Ross and Rachel are on again (for now)”

Of course, a show like this needs to have a cast that the audience can recognise and boy do they hit that nail square on the head.  The mannerisms of Jamie Lee-Morgan as Ross is uncanny – he looks like David Schwimmer but even more impressive, his dorky, foppish fawning and frustrated attempts to control life is comedy gold.  Fans will instantly see the Ross on tranquilizers, the Ross on prom night, the Ross on a break.  Playing opposite Lee-Morgan is Charlotte Elisabeth York as Rachel Green.  From her manic introduction in rain soaked wedding dress, York takes Jennifer Aniston’s spoilt rich girl persona and gives it both barrels (literally, with her not so subtle nod to her ever growing ‘points of view’).  The two of them create a fabulous lampoon of their ‘On Again, Off Again relationship’ which is one of the hilarious musical numbers.

“The One where Monica and Chandler avoid moustaches”

Obsessive Monica with her megalomania towards order and control is played by Sarah Goggin and she absolutely nails it.  Sarah’s perfection of Monica is wonderfully astute; desperate to be the lynchpin the group revolve around, she has Monica’s compulsions, psychoses and desires all tied up in a bundle of seven.  Thomas Mitchells plays her beau to be Chandler, the sweater vest wearing data transponster, with aplomb;  always looking for the ‘witty’ one liner, plagued by a previous love, and destined to do his victory dance with Monica, Mitchells gives comedy gold with his fear of Richard’s Moustache.

Ally Retberg is ever loveable Phoebe, complete with guitar, kooky life story and triplets.  Ally has Phoebe’s puppy-like excitability off to a tee, jumping for joy as every little victory is celebrated and always looking for the sunshine behind the clouds.  At present, Joey is played by Duncan Burt (standing in for Jordan Fox) and, like the rest of the cast, is brilliant in his portrayal of everyone’s favourite soap doctor.  Whilst there is little evidence of Joey’s Queens’ accent, his innocent misunderstandings and love for sandwiches are immediately recognisable, as his is charisma and charm for the ladies.  Particularly impressive is Duncan’s recollection of all of Joey’s lady friends, a list that rivals the colours of Joseph’s Dream Coat.

Whilst the main cast also play one or two other cameos, the main support comes from Rebecca Withers who pops up as Gunter, Janice, a brilliant Richard and an hilarious Emily, giving the scenes even more comedic richness.

“The One where you go buy tickets”

Friendsical is a 2 hour spectacularly funny, heart warming look back to TV for simpler times before the real world pressures of Brexit, Trump, Global Warming, Recession and without the ‘wokeness’ of current PC correctness dominated the writers room.

Friendsical is on tour – check out the website for dates and tickets – https://britishtheatre.com/friendsical-uk-tour/

A brilliantly funny, clever and witty retelling of the story of Friends.  It’s like going to see your favourite aunt who is now in a nursing home with dementia – she remembers most of what happened but it’s not exactly the same, the timelines get a bit confused but overall you can sit and laugh at the shared memories.