Posted on August 14th 2017 by Whats on Northeast 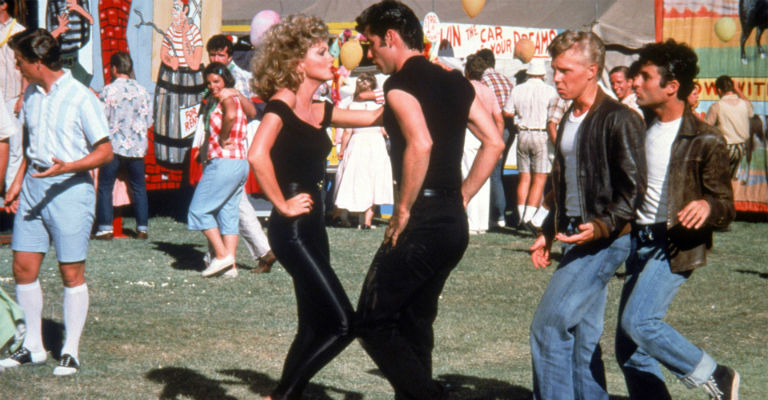 There isn’t a more perfect drive-in movie than Grease – it literally has a drive in cinema built into the storyline! So to say I was excited would been an understatement. However, I couldn’t quite work out how the prestigious Wynyard Gardens would marry up with the 1978 cult classic; they just aren’t two things I would ever put together, so I was very curious what the evening would entail. Would I drive out feeling “hopelessly devoted” to Wynyard’s outdoor cinema experience? Spoiler alert: I did.

Once on Wynyard Hall grounds, there were a couple of signs directing you away from the Hall itself towards to the gardens. I have been before but it’s easy enough to find (the roads on the grounds are quite narrow, so keep that in mind if you’re a first time visitor). On arrival, we were greeted and directed to a parking spot on the open field opposite the Gardens. This was where we were introduced to a drive-in cinema from the modern era, parked in front of an inflatable screen surrounded by Range Rovers and Mercedes instead of the vintage Dodge Wayfarer Convertible that Danny and Sandy rolled up in.

The atmosphere was full of anticipation, helped along further by the appearance of a couple free drinks tokens. The refreshment area was where the Wynyard touch came to fruition. You were immediately greeted with a bright yellow vintage van with “Danny loves Sandy” illuminated on the dashboard in a light box. It’s always the small details that Wynyard do so well, and a lot of people commented on this cute little touch. It definitely got you more excited for the main event whilst collecting your free drinks!

Back in the car, and tuning the radio to the right frequency to then hear Grease blaring out of everyone’s cars made the excitement levels spike again. After sunset, the Paramount logo popped onto the screen and the film began. I loved the experience; it was a really well managed event that was clearly enjoyed by everyone (there were even a few Pink ladies walking around!) The Wynyard crew on site were also very quick to resolve any problems. The screen did start to deflate and slightly collapse about 20 minutes into the film, but this was quickly rectified and there were no other glitches. The only thing I would change would be some sort of more organised system to get out once the film was over. It very much turned into every man for himself and created congestion, since nobody really knew what direction to take off the grass.

However, the whole evening was really good value for money.  For £18 you got to see Grease on the big screen, a drink (non-alcoholic varieties available for the designated driver too!) and great seats if you get there early enough. I’d definitely go to another of Wynyard’s outdoor cinema events in a heartbeat!

To find out more about events at Wynyard Hall, visit their website.