Posted on February 14th 2018 by Whats on Northeast 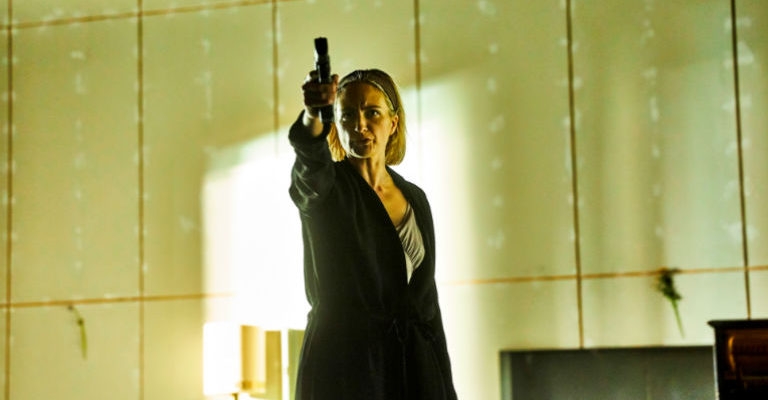 As the tagline very efficiently describes, “Just married. Bored already. Hedda longs to be free.” Henrik Ibsen’s Hedda Gabler has been modernised by Olivier and Tony Award winning playwright Patrick Maber. The central story remains pretty much the same, despite being over 120 years later the subject matter is still relevant. Freedom seems to be the underlying theme in this entire production. Each character is trying to escape in their own way whether it’s escaping from demons like Lovborg, an unhappy marriage like Mrs Elvsted, and then there’s Hedda, who wants to be free of everything.

The entire play is set in the apartment of newly married Hedda and Tesman, specifically the living room. The set is literally a box, simple with bare walls and floor, sparse furniture but with an enormous window that hints at the outside world. It lights the entire play, a light that Hedda describes as ‘oppressive’. It symbolises life outside the box, beyond the confines of this marital home that Hedda finds her self symbolically trapped in. Ibsen notes that women have no influence on the public, so instead they influence individuals, and this is exactly what Hedda does.

To be frank, Hedda is in no way a likeable character, she is often detestable and very manipulative. Regularly, those around her describe her as an object of beauty, sometimes as if she’s the prized possession. Her husband actually says to his Auntie that he has the privilege of seeing Hedda naked, which is both incredibly inappropriate and uncomfortable for everyone but Tesman. The men in the play are obsessed with her, and the women don’t really understand her. Hedda uses all of this to her advantage to control the people around her. I can’t decide if she is a victim of her environment or the catalyst of her own misery.  But this is exactly what Hedda Gabler does, it makes you analyse behaviour and interactions. Shockingly, a lot of the behaviour is seen as normal in society – the characters just happen to be residing at the extreme end of the spectrum.

Another indication of Hedda’s persona is how sparsely this very expensive apartment is decorated. There are 3 things on the walls; the first a fire extinguisher – definitely not used to extinguish burning lust in their marriage. The second is a mirror – to check her appearance. The third is a display case holding her prized possession; her fathers guns. Hedda says she likes to shoot into the clear blue sky. She shoots into nothing, to fill a void perhaps. It literally displays control, violence and protection; the guns are used to make her home, her isolation ‘beautiful’.

The cast is incredible. Lizzy Watt is absolutely phenomenal – her timings, her deadpan expressions paired with hilarious quips, the silent rage and struggle she presents are all utterly sublime. There is electric chemistry between the whole cast, everyone bounces off one another to create a captivating show.

As a rule, The National Theatre produces exceptional theatre and Hedda Gabler is no different. This fast paced, beautifully written performance completely engrosses you. I left the show last night knowing that I had thoroughly enjoyed it, but on reflection I’m in awe – it is without a doubt some of the best live theatre I have ever seen. Unlike the characters, I have literally woken up this morning and smelt the roses, because my god, what a show.