Posted on October 29th 2019 by Whats on Northeast 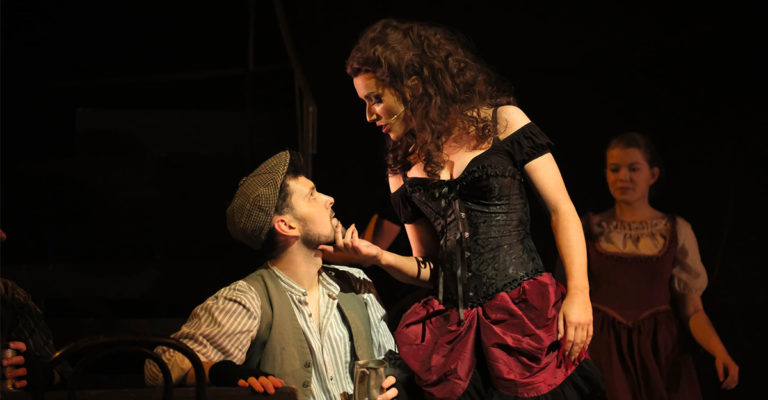 It’s not often that you get chance to see something new, for which you have no preconceived ideas and have been able to avoid any previous reviews.  Whilst many have read the story of Dr Jekyll and Mr Hyde, there are few who have seen it as a musical and even fewer who will have enjoyed such a powerful and professional production as Darlington Operatic Society are performing.

With the story closely following Robert Louis Stevensons’s classic gothic tale, this deep view of the human psyche exposes the fundamental challenges everybody has; there is good and evil in us all, it is how we control them that determines who we are.

For this performance, the eponymous lead is played by Luke Oldfield who, from the very first scene, is the quintessential Victorian scientist, long hair tied back, resplendent in waistcoat and presenting with the clipped accent of the London elite.  His appeal to the governing body for their approval to continue his experiments is almost Darwinian yet, even at this apparent sane stage, he is able to convey a deeper desire, a drive to succeed and a passion to do so at all costs, especially when they all vote to refuse him his request and so sew the seeds of hatred which grow into the actions of murder.

The gentleman doctor is engaged to be married to socialite Emma Carew (played by the one and only Beth Hopper whose voice is instantly recognisable and as warm and welcome as summer rain) so he finds his passions for science somewhat constrained by the expected façade of society.  Torn between playing the expected love struck fiancée and his true passion for scientific discovery, it is when the good Doctor assumes his alter ego that Luke goes though a metamorphosis which would rival many CGI driven movies.

His long hair becomes an unkept mass, his body seems to grow to almost twice his size and the menace he exudes is simply terrifying.  At first you will find yourself checking that there are not two actors but no, it is simply a masterclass to any actor on how to drive a character into the heart of the performance.  Driven by his being shunned by his peers, Hyde sets out to wreak his own sense of justice, with murderous intent.

As the Doctor begins to wrestle with his inner demon he seeks solace with Lucy, a hard candy coated, soft centred working girl who sees in Dr Jekyll a turmoil and anguish she can relate to.  Sadly for both her and the doc, Mr Hyde also sees Lucy as someone he can engage with, and despite, or perhaps because, of Jekyll’s affections, he sets out to destroy her.  Jessica Harrison, as Lucy, is outstanding.  Often such platitudes are used lightly but here it is so very much deserved and as the 3rd person in a triangle of turmoil, she plays the innocent loser with such passion and compassion that it is hard not to be moved to tears.

The sets and costumes for this production are steeped in Victoriana – elegant gowns and capes of high society are played off against the rags and squalor of the London slums while the soundtrack is very much akin to the depth and magnitude of Les Miserables – anthemic themes are balanced against soulful solos.

Darlington Operatic Society are widely heralded as the region’s best amateur theatre company but this production surely elevates them into a new and exciting division – I doubt that there are many, if any, companies across the whole UK who can deliver such a polished and professional performance.  As someone who now works in London, this is a performance that would not be out of place amongst the West End – for the people of Darlington, you must go and see this.

Running from October 23rd until 2nd November at Darlington Hippodrome, Tickets are on sale now by calling the Ticket Hotline on 01325 244659 or online at www.darlingtonos.org.uk.