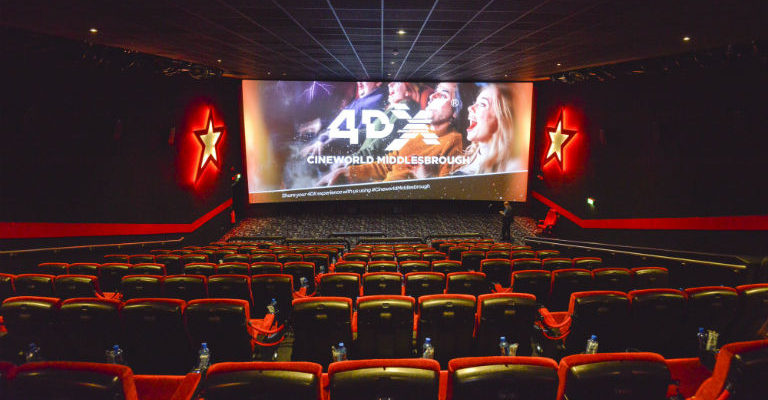 If the regular cinematic experience just doesn’t cut it for you, the newly refurbished 164 seater 4DX cinema screen at Cineworld Middlesbrough could be just the ticket. My husband and I got to watch the new Avengers Infinity War film last night (and that needs a whole other review of its own!) as part of the opening of the new fully immersive 4DX cinema. This experience has it all; smells, sounds, movement and visual extras that you just can’t get whilst watching a regular movie. As one of the first media members allowed into the new screen, I sat down for an impromptu interview with Darren Rogers – General Manager of Cineworld Middlesbrough and Jason Bainbridge – Cineworld Regional Manager.

With the opening of the new screen, how do you feel it will attract cinema goers to Cineworld over regular cinema’s? “4DX is a unique concept to Cineworld, there’s only Cineworld that can offer this in the UK. It stimulates all five senses, the seats move in conjunction with the movie, and in addition to that you have the water effects, various smells, snow, bubbles, wind and strobe lighting courtesy of the effects bars in the ceiling of the cinema. There’s plenty on offer; it’s a really immersive experience,” said Darren Rogers.

And are there any plans to show previous blockbusters that would lend itself to the new 4DX experience, the likes of Avatar, Star Wars, Harry Potter films etc?  “The actual product line-up that we’ve got coming up in the next couple of months will really book us up right through the summer. So we’re launching 4DX Middlesbrough with Avengers Infinity War and in the next couple of weeks we’re having Deadpool 2, then we’ll have Solo: A Star Wars Story, then following that we’ve got Jurassic World Fallen Kingdom. So that takes us right through to the middle of the summer. Then there’s more product and film titles online as well so, if we have opportunity and space, maybe in the future, but at the moment the new films coming online will be keeping us busy,” said Jason Bainbridge.

And one final question. Jason laughed with me as I asked him if we’ll see nachos and popcorn flying around the cinema? “We’ve had an experience of watching customers view a film with the full package of snacks and once they’ve actually realised how quick and steep the movement of the chairs are, they soon adapt. But I’d say that there are occasions where there have been small accidents, but I think that’s all part of the fun and experience of 4DX.”

My family and I (myself, husband and two children) are regular cinema goers, but after the two of us sampling the 4DX experience last night, it would be rude not to take the kids to experience a 4DX film too. Good job Solo: A Star Wars Story is almost upon us! The husband and I had a whale of a time watching Avengers. However, I think 4DX would only work with high action films and not your chick-flick romance movies. Built in blocks of 4 seats and moving in perfect synchronisation, the rows moved with the camera, panning around as the camera took in the scenery, jolting around as cars crashed and explosions took place, puffs of wind would whizz past your ear from the headrest when superheroes flew above you and clever gusts of air would rush past your feet as things scuttled along the floor in the film. And of course, when we entered Wakanda (home of the Black Panther for those that aren’t fans of the Marvel franchise) the floral and woodland scents that were pumped into the cinema was very clever indeed. And especially with the 3D glasses on, you almost forgot that you weren’t actually in the film.

I had reservations on how easily I would be able to get out of my seat and visit the ladies or buy more snacks, but I needn’t have worried. The aisles in front of the seats are quite wide and are static along with the stairs so there’s plenty of room for manoeuvring when high impact actions scenes are taking place and the chairs are moving around. The 4DX experience does have some restrictions though, for safety reasons. It isn’t suitable for pregnant women, no one smaller than certain heights and weights, and isn’t advised for those with certain health issues. So if you’re thinking about visiting a 4DX film, I’d make sure to check online beforehand.

The tickets are slightly pricier than your average film, with a family of 4 paying around £58 to see the likes of Avengers in 3D 4DX. However, pricewise, it’s actually quite comparable to watching 3D IMAX movies at other cinemas. So build in the fact that 4DX is fully immersive, and I don’t think that’s too bad a price. But overall, we’d definitely pay that to have the 4DX experience that you simply can’t get anywhere other than Cineworld. As a side note, the location of Cineworld Middlesbrough was great; easily accessible, some good places to eat in the immediate vicinity and even the adjacent car park was free after 6pm. So all in all a big thumbs up for the whole night from my husband and I.