Posted on February 28th 2019 by Whats on Northeast 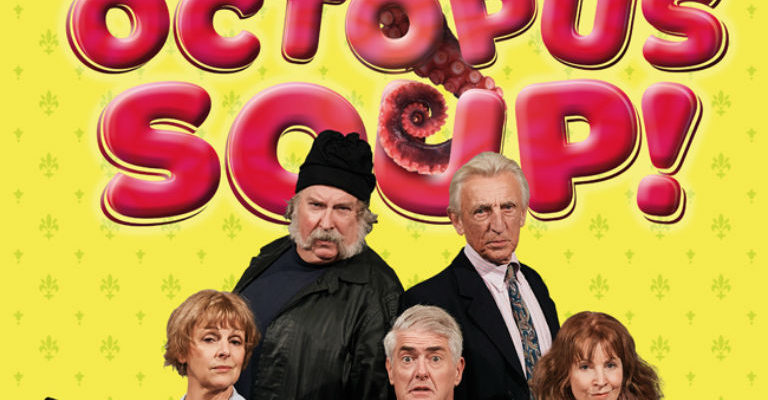 The algorithm needs a tweak here and there but there’s definitely something new and ambitious.

On the face of it a failed insurance presentation, a bugled burglary and a neurotic actor don’t sit as comfortable bedfellows when imagining a new British farce.  Throw into the mix  a pet octopus and a gangland crime-lord and brows could furrow even more, yet underneath the absurdness of the set up (and the pay off) there lies an ambitious attempt at bringing the well-trodden path of clever word play into the 21st century.

Written by Jack Milner and Mark Stevenson and produced by Simon Fielder, Octopus Soup sets itself in the here and now as Nick Hancock’s (Room 101, They Think It’s All Over, Mr Bean) insurance consultant Seymour attempts to present his pitch for fiscal liquidity to highly strung and corporate big-wig boss of G.I.T Insurance Virginia (the brilliant Gillian Bevan aka Theresa May in The Windsors).  Interrupted in his preparation by criminal lifer and less–than-adept burglar Marvin (Holby City’s Paul Bradley), Seymour desperately clings to the hope that if he can only get through his death by power point he will seal the deal, but Marvin has a better idea.  Borrowing a premise from Mel Brooks’ The Producers, he begins to tempt Seymour into realising that you can make more money melding crime with honest accounting – or in this case, knowing in advance where to insure against burglary and where to avoid.

The traditional farce elements of slapstick physical comedy are kept to a minimum, instead relying on multi-layered word play and misdirection. The introduction of Seymour’s highly strung and somewhat neurotic actor wife Gloria (Carolyn Backhouse) adds an extra level of distraction but needs a little more work – at times it is confusing to understand where Gloria actually fits into the crime caper (or why she doesn’t) but her Sunderland accent is very funny indeed.  The 2nd act introduces Marvin’s crime boss, the threatening Alan played by Eric Richard who obviously draws on all the London crimes he had to play opposite during his 17 years as Sergeant Bob Cryer in The Bill. There could be some funny interactions between Alan and Virginia, especially as neither initially know what the other does for a living but this just doesn’t quite land (yet).

For two thirds of the show the pace is somewhat deliberate, yet sadly, the pay-off feels a little rushed; not in the sense of the delivery, but in the writing, as if the final third was squeezed in to meet time – elements which play a major part at the end have not been hinted at earlier, leaving a few puzzled looks and a sense of ‘almost but not quite’.  That said, this is most certainly a work in process and there is far more to enjoy than to criticise – as the run continues I am sure there will be further tweaking which will only serve to enhance and increase the laughter and I will certainly be looking to see it again in a few months time.

Octopus Soup is on at Darlington Hippodrome until Saturday 2nd March. Get your tickets now @  https://www.darlingtonhippodrome.co.uk/whats-on/octopus-soup/