Posted on October 12th 2018 by Whats on Northeast 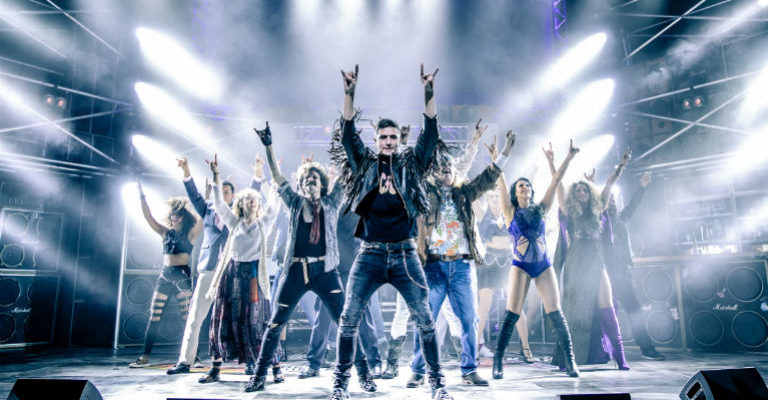 Funny. Camp. Energetic. Raunchy. Rock of Ages has it all!

Set in the mid-80’s, this nostalgia filled hit musical, which has seen huge success in Las Vegas and Broadway, propels the audience back to the decade of excess when leather and denim studded outfits, complete with Whitesnake-esque permed hair and headbands, were all the rage. It’s an unlikely love story, taking place on the infamous Sunset Strip in LA, with the hilarious satirical show pulling together a plethora of classic story lines, including boy meets girl, unsuspecting romance blossoms, small town to big city dream chasing and even a father/son bump in the road. The casting was spot on, from the main characters of Sherrie and Drew to the rest of the dancers and ensemble, it all just worked harmoniously – much like the singing.

The live band belts out a jukebox extravaganza of 25 classic rock anthems which, if you don’t find yourself singing along to, then I’ll eat my hat! Including the likes of, ‘We Built This City’, ‘I Want To Know What Love Is’, ‘Feel The Noise’ & ‘Final Countdown’, even if you don’t like the rock genre, you’ll somehow know the words and find yourself rocking out; it’s just infectious!

Narrator Lonny, club manager at The Bourbon Club (which is based on the famous Whiskey a Go-Go), is foul mouthed and hilarious and with the nightclub owner, hippie Dennis Dupree (played by Kevin Kennedy who had the role of Curly Watts in Coronation Street) they have to save their club from being demolished and replaced with a fancy new build. Authorised by the city’s corrupt mayor and a German developer, along with his son Franz, it’s a race against time to save the club. But back to Franz, a totally unsuspecting character, brilliantly played by Andrew Carthy, he’s so funny and a total dark horse! I won’t spoil it, but one of his costumes is outrageously fantastic!

A big shout out deservedly goes to Zoe Birkett, a regular on the Darlington theatre scene, who plays the owner of Venus, a strip club opposite the Bourbon Club on Sunset Strip. She’s feisty, beautiful and can sing for days.

There wasn’t overblown set designs, or many set changes, but that didn’t matter as the throw-back costumes (and hair), dances, and hilarity told the story perfectly. I’d never seen the film before so wasn’t sure what to expect from the show, but it was well worth it. Me and my friend had a great night, a little sing-song and, especially at the end, a good old boogie. Although not for a younger audience, Rock of Ages is a good night out and I fail to see how you wouldn’t have a brilliant night singing and dancing to the many well-known songs.