Posted on August 6th 2019 by Whats on Northeast 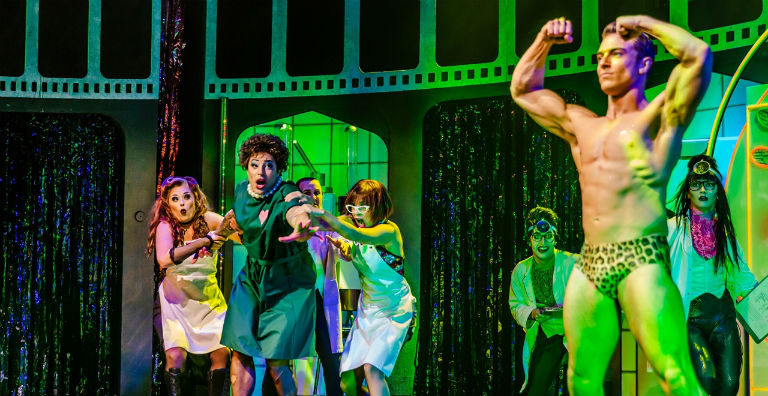 For many, many years, Rocky Horror has been synonymous with late night cult, dressing up and Sci-Fi ‘B’ movies, audiences resplendent in their stockings and basques and lead actors trying hard to emulate the perfection that is Tim Curry.  For many attempts it rates as good fun but this most recent production takes the spectacle into another realm, that of bloomin brilliant.  Any fan of Rocky Horror MUST see this version (and I know, this was the 25th different production I have seen) – it is as close to the original stage and screen production but with bang up to date set and lighting.

Everyone going to see Rocky probably knows the story; teenage couple get stranded at a strange lodge and endure a night of passion, confusion, fear and ultimate realisation. The themes of 50’s sci-fi and the fear of the unknown are still relevant today but lets be honest, this show isn’t watched for its social commentary,  we want sex and drugs and rock ‘n’ roll.  Frank ‘n’ Furter, the crazed alien doctor hell bent on creating the perfect man is played by Duncan James (he of Blue) and to be honest, the BEST Frank I have seen.  His portrayal of a sex crazed megalomaniac is brilliant – part dominatrix, part innocent child but all RHS.  Callum Evans plays Rocky and is probably the ultimate specimen of man; toned, tanned fit and ready as a certain Dogg would say.

I have seen Rocky through 25 different productions (since the original RHPS) including ‘star’ billing, West End and anniversary shows but this one, with Duncan James as Frank is the ultimate – he is perfection worthy of rivalling the master Tim Curry.  Resplendent in feathers, dominant in a basque yet vulnerable in every scene (no more so than the tear jerking Cards for Sorrow Song) Duncan is, after 30 years of watching, my favourite Frank.  Joanne Clifton as Janet is wonderful, her progression from prissy virgin to wakened woman is brilliant  while James Darch as Brad keeps the stiff Mid-American expectation that men are men and women are women.   The supporting cast are also worthy of mention, in particular Laura Harrison who opens the show as the Usherette and sets the whole show perfectly  – it is liking watching real fans of the original RHPS getting their chance to play their favourite parts and they do so with perfection.

The complete show, brilliantly directed by Chris Luscombe, set by Hugh Durrant and perfectly lit by Nick Richings, gives a 70’s ethereal feeling backed by an ultra-modern high tech set and light show that brings the audience right into the party , steps back to the original ’73 production but keeps everything fresh and new. The whole cast appear to be real fans of the original and, a such, their portrayal of their roles is perfection – homage to RHPS and yet keeping the raw, real feel of live theatre.