REVIEW: Snow White and the Seven Dwarfs @ The Gala Theatre

Posted on December 20th 2018 by Whats on Northeast 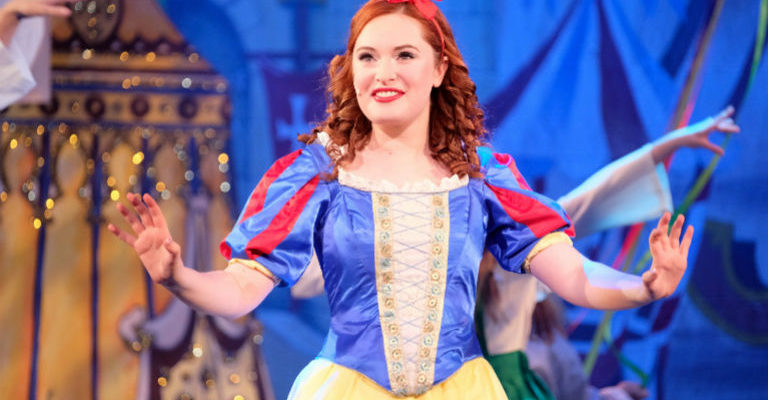 As regular audience members of the annual pantomime scene, my family and I were hi-ho-hi-ho off to watch the residents of Fairyhill try to save their enchanted village this weekend from the evil Rupert Von Rottenchops. This year’s production of Snow White, a panto classic that has been reimagined by the Gala stalwarts and marvellous production duo of Paul Hartley and Neil Armstrong, pulled it out of the gag bag once again with a local twist on the story that was full of audience jibes and participation that everyone loved.  This year’s panto dame was Dolly Doodle, aka Paul Dunn, who, for the purposes of this story, was the ‘maternal’ figure in Snow Whites life. Abandoned at birth, Snow White was taken in by Dolly and together, with help from the village, Snow White was raised without the knowledge that she is the rightful heir of the throne, with Rupert Von Rottenchops behind the frightful slaying of Snow White’s mother, the Queen, early on in the fairytale. The plot to kill Snow White is done quite sympathetically, especially as the Woodsman becomes a loveable character throughout the story and eventually, it all turns out alright in the end. Lauren Waine plays Snow White brilliantly and I felt she really captured the hearts of the audience with her portrayal of the diminutive princess. Chester the Jester (aka Paul Hartley) was the pantos comedy fool and the section with the balloon trick was absolutely hilarious with Corporal Crosby having to translate what Chester was trying to squeak out. It certainly transported me straight back to the 90’s when Sooty and Sweep would make me laugh after school! The set designs seem to improve every year and even the opening scene with a backlit sheet and the dancers behind was a simplistic yet different touch to get the audience up to speed with the beginning of the story. Overall it was a cracking night out for all ages, with a good sing along and jokes for both the mams and dads and the kids. Snow White runs right up until the 5th January 2019 and is well worth a watch with the family.