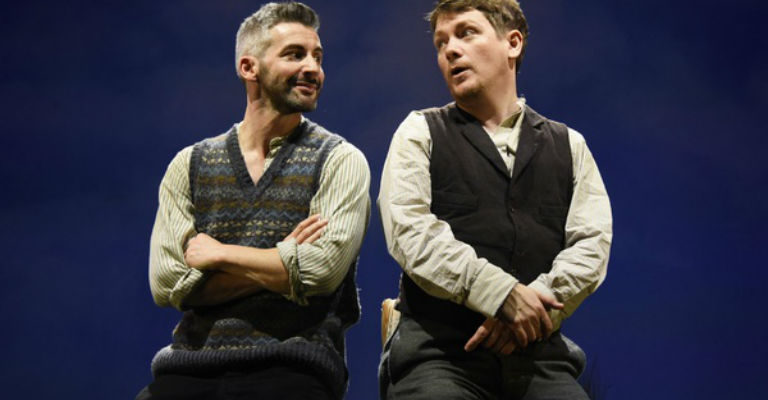 Marie Jones’ brilliantly funny and heartwarming play about the local etras involved in the filming of a Hollywood movie hits Darlington Hippodrome and gives a masterclass in characterisation and storytelling.

Directed by Lindsay Posner (Abigails Party, View from a Bridge) and starring Owen Sharpe and Kevin Trainor, the story centres around a small Irish village turned upside down when a Hollywood film crew descend, employing most of the locals as extras and washing over real life with the gloss of tinsel town.  Good friends Charlie Conlon and Jake Quinn take centre stage as they, like the village, are initially excited by the razzamatazz of filming, (especially as Charlie has himself written a script) As time goes by however, they realise they are simply wallpaper, scenery no more important than the cows in the fields for a production company more concerned about fading light than fading life.  Following the tragic suicide of a young villager Sean Harkin (who is humiliated by the crew and drowns himself by putting stones in his pockets, hence the title) the village have to decide whether the £40 a day fee is worth selling their souls.  Charlie and Jake decide to change his script and make it about poor Sean’s life and, despite the usual attempts by Hollywood to glamorise it, they stick to keeping it real.

Sharpe & Trainor play all the parts between them (including Ashleigh the production assistant and Caroline the glamourous superstar) using nothing more than an extra hat or a different jacket.  Their mannerisms and appearances morph brilliantly from one character to another and would provide an budding actor with a textbook study on how to project individualism with minimal props.

Whilst Jones wrote this in 1995, well before Netflix and the mega money productions we see today, it is strangely prophetic – take Game of Thrones for instance and how this show has taken over whole towns to film scenes, or the recent Marvel Universe movies – all promise the ‘locals’ some glamour and prestige to have been a part of a blockbuster, but reality all the production team want to do is get in, film, get out as quick and cheaply as possible.

Stones in his Pockets is a wonderfully funny yet sadly tragic story packed with great characters and performed brilliantly – a must see 5 star production.