REVIEW: The Book of Mormon

Posted on September 2nd 2019 by Whats on Northeast 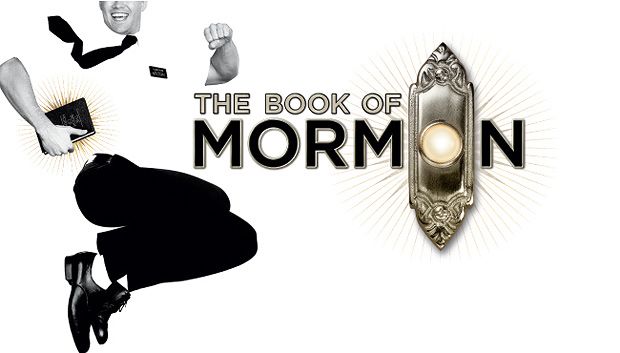 The creators of anarchic ‘kids’ cartoon South Park, Matt Stone and Trey Parker have written one of the all time funniest musicals, jampacked with fun-poking, heckle-raising, unbridled (and unapologetic)  attacks on one of the most elusive religions in America.  In doing so, they have given the current ultra-PC society a fantastic escape where you can laugh out at bigotry, snort with derision at the fallacies of religion and struggle to breath with the sheer ‘middle finger to tradition’.

The tale is of two Mormon missionaries, teenage boys who are destined, by their culture, to set out to a distant place and bring the teachings of The Church of Jesus Christ of Latter Day Saints.  For our two starlets, Elder Price (the all American, god fearing, 3rd gen Mormon – played by Kevin Clay) and Elder Cunningham (the chubby misfit whose attempts to fit in lead him to fantasise or dare we say embellish the teachings of Joseph Smith – played by Jacob Yarlett) their paths are mashed together and they are sent over to Uganda to attempt their conversion in deepest, darkest Africa.

Elder Price, the brightest elder in his class,  had long been hoping for his mission to be in Florida while Elder Cunningham had just been hoping not to be left behind and maybe make a friend, so their journey was not one either would have chosen, but they endeavour to do their very best.

The African village is in the grasp of an evil dictator (with possibly one of the funniest names ever written, but for sensitive eyes I will not repeat it here) so not only do the missionaries have to overcome the villagers’ scepticism, they also need to challenge the guns and brutality that prevents them from choosing their own path.  Village sweetheart Nabulugi (the wonderful Nicole-Lily Baisden) finally recognises that the Elders have a story to believe in (though it is Elder Cunningham’s version they are told, complete with his addition of some less than authentic characters and events) and manages to convince the rest of her tribe to accept their teachings and convert,

For anyone who has watched South Park (either the TV show or their 1999 feature movie Bigger, Longer, Uncut) you know that Stone & Parker will never shy away from ripping open society and inserting their own observations with a locker-room attitude.  Origins of religion, Disney corporation and American obsession with their past are mashed up with FGM, racial oppression, homosexuality and even Brexit and given a high-octane make over with some brilliant songs and dance routines.  Casey Nicholaw’s choreography and Colm O’Regan as musical director have created ‘Broadway plus’ with the showstopping scenes jam packed with glitz and glam.

Book of Mormon is, without doubt, for those who are not easily offended (or those who feel that in today’s climate they have become so desensitised that they need a big boot up the behind to remember how to be offended again).  The audience reactions is split between laughing out loud and gasps of faux indignation but above all else, it is a wonderfully safe environment in which no one will judge you on what you find funny so let rip with the belly laughs, it’s good for the soul.

The Book of Mormon is running at Sunderland Empire until September 14th with tickets still available.  Sunderland Empire is one of the best theatres in the UK for musical productions and their embrace of BOM makes it the perfect evening.  https://www.atgtickets.com/shows/the-book-of-mormon/sunderland-empire/