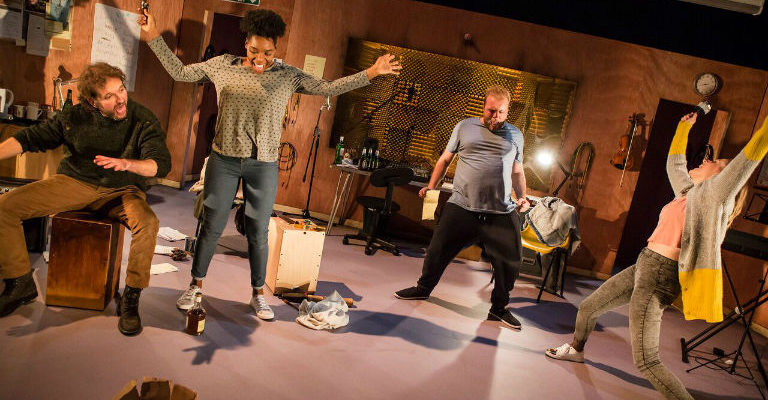 A tragi-comedic look into how we perceive other, how they perceive us and how the two can be so drastically different depending on the view point.

The Leftovers, the latest production by Sheep Soup and written by Nic Harvey, is the story of 5 musicians whose lives are inextricably linked by the death of a Jodie; a mutual friend, confident, lover and yet, as we discover, they all seem to have known a completely different person to each other.

Set at a recording studio (wonderful designed by Lizzy Leech), Yaz (Philippa Hogg) wants to capture her relationship with BFF Jodie in a song.  She has enlisted Jim (Ben Welch) as musician and technician to help her record the song and Hayley Reigns/Rains/Reins (Sarah White), a published songstress to help write it but they are struggling to really capture the mood and style which best represents the person they knew.  Was she the life and soul of the party without a care in the world, or a troubled soul who was constantly putting on an act? Was she a trusted and loyal friend or a stabs-you-in-the-back user who flitted from one good time to another?

As the story progresses we are introduced to two more of Jodie’s past – Russ (Tim Murphy) who is a once hippy traveller who knew Jodie for a year as they explored the far flung reaches and Angie (Wreh-asha Walton) for whom Jodie represented much more than a brief friendship, which sadly  appears to have ended abruptly.  The discovery of a box of writings, diaries and messages, along with some old voicemails, helps to unpick Jodie’s tangled life but for the others they only serve to open old wounds and shatter long held beliefs.

Each of the assembled have their own story to tell and these are done through the guise of improvised song writing in their attempt to produce the one piece that truly captures the impact Jodie had on their lives.  Brilliantly directed by Adam Lenson and with the erudite and enthralling musical direction of Rob Green, The Leftovers unpeels the onion of life and shows that a throwaway comment to one person can be held as lifetime moment to another.  The way that Jodie’s character and her interaction with each person is revealed is as thought provoking as it is entertaining – very much akin to 13 Reasons Why and Hannah’s tapes that destroy perceptions and expose lies.  That said, there is still a great amount of comedy in the show and of course no end of genuine musical talent.

As always, Northern Stage is THE place in the North East for ground breaking productions, showstopping performances and naturalistic delivery, be sure to check out their webpage for details of forthcoming shows.