Posted on March 26th 2018 by Whats on Northeast 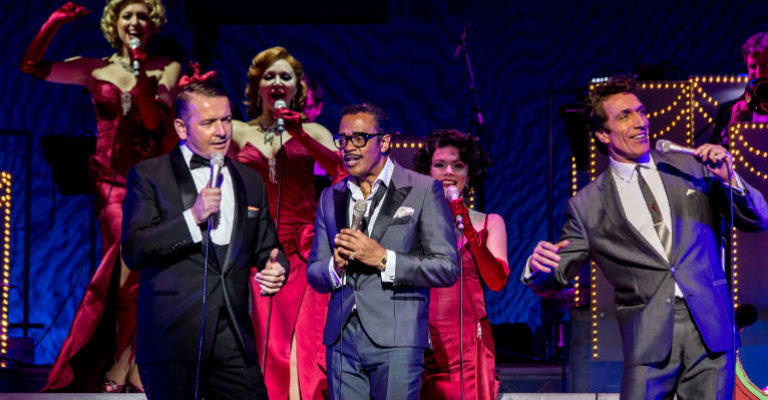 It will be 20 years ago in May that the world lost one its most beloved and revered entertainers – Frank Sinatra is instantly recognisable, not only for his super smooth voice but his style and stage presence.  Fans of Frank are some of the most loyal and vociferous in the world so any production which attempts to recreate his Vegas Lounge shows is going to have to be perfect to pass muster.  The Rat Pack – Live from Las Vegas does just that – from the first raise of the curtain to the last encore, all the performers are note perfect and combine brilliant singing with the mannerisms and interplay that made their shows legendary the world over.

Hit follows hit including Pack favourites The Lady is a Tramp, Mr Bojangles, That’s Amore, I’ve Got You Under My Skin, What Kind of Fool Am I, Volare, My Way, Everybody Loves Somebody, Night and Day, S’Wonderful, Mack The Knife and many more.

Frank Sinatra, played by the phenomenally talented Garrett Phillips, is clearly the leader of the pack, at times letting the other two, Nigel Casey as the always well oiled Dean Martin and David Hayes as the jack in the box live wire Sammy Davis Jr, mug off and play around while he stands and observes like a friendly but stern uncle.  Phillips never resorts to a cabaret version of Sinatra just trying to bang out the big numbers, he captures all the subtleties of the great entertainer without it ever feeling like an act, more like he has embodied the persona.

Casey manages to walk the fine line of Martin’s legendary drinking on stage to perfectly blend the brilliant crooning with just a frisson of ‘what am I doing again’ that always gave the impression he was one sip of scotch away from passing out.  Hayes has perfectly bottled the jazz freedom that Davis brought to the Rat Pack, at times taking off on a scat journey that seemed a million miles away from the song he was meant to sing, yet always returning to the familiar tune in perfect timing.

The show is further enhanced by a very special guest Nicola Emmanuelle as a show stealing Ella Fitzgerald, the sensational Burelli Sisters and a stunning big band led by Matthew Freeman which creates a rich sound that wraps around you like a huge blanket.

Looking around the audience, most were of an age that would at least remember the songs being first released, if not the actual live shows, but a quick flick to YouTube and you can see all the original shows featuring these 3 mega stars – what is most impressive of this current show is that all the witty one liners, the ribbing between Dean Martin and Sammy Davis Junior, the master interjections by Frank Sinatra and the sense of 3 mates having fun is ever present.  This is far more than just a ‘Stars in Their Eyes’ type show, it feels like you’re being allowed to peek behind the door into a private lounge where three guys are just having fun with their mates.  Playful changing of lyrics, messing with the stage and set, trying hard to make each other laugh and of course, the suggestion that they are ‘well oiled’ all add to the sense of a full evening of entertainment.

For fans of the 3, this is a must see, for anyone who knows their songs and perhaps has a few favourites, go see this and pretend your back in the 50’s in Vegas – regardless of the size of the theatre you’re sat in, within a few minutes you feel like you’re in an intimate cocktail lounge, all that’s missing is the smell of cigarettes and the clink of glasses.

If you miss it at Sunderland Empire, this show is coming to the fabulous New Darlington Hippodrome from Tuesday May 8th – tickets at https://www.darlingtonhippodrome.co.uk/whats-on/the-rat-pack-live-from-las-vegas